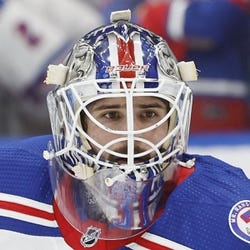 2022 Stats
W
21
L
8
SO
1
GAA
2.45
SV%
.918
ROS Projections
W
L
SO
GAA
SV%
Unlock Our Projections
2022 Fantasy Outlook
Any fantasy manager lucky enough to have Shesterkin on their roster a season ago was rewarded with one of the best seasons by a goaltender in NHL history. His 2.07 GAA and .935 save percentage both led the league, while adding 36 victories and six shutouts. Shesterkin won the Vezina Trophy as the NHL's top goaltender, while finishing third in voting for the Hart Trophy as league MVP behind only Auston Matthews and Connor McDavid. It's a stretch to expect a repeat performance given how dominant Shesterkin was a year ago, but he won't turn 27 until the end of December and even a minor dip in his numbers would still result in Shesterkin being one of the best netminders in the game. He has a real chance to be the first goaltender off the board in fantasy leagues this coming fall. Read Past Outlooks
read more
#

Calculate Stats Over Time
Just click on any two dates.
Scoring
FanDuel
DraftKings
Yahoo DFS
FantasyDraft
Head2Head
Loading Goalie Game Log...
2022–23 Time On Ice Stats
Rangers Depth Chart
Our full team depth charts are reserved for RotoWire subscribers.
Subscribe Now
Recent RotoWire Articles Featuring Igor Shesterkin See More
DraftKings NHL: Friday Breakdown
Yesterday
Yesterday
Michael Finewax’s Friday player insights include a Panthers forward stack against the visiting Kings.
Yahoo DFS Hockey: Friday Picks
Yesterday
Yesterday
Chris Morgan previews Friday’s Yahoo offering, rolling with the Islanders’ Brock Nelson against Detroit.
NHL Picks Today: Expert NHL Bets for Rangers vs. Maple Leafs
3 days ago
3 days ago
Dan Dobish breaks down Wednesday's Rangers vs Maple Leafs matchup and lines up his best moneyline bet and player props to target.
DraftKings NHL: Wednesday Breakdown
3 days ago
3 days ago
Igor Shesterkin makes Sasha Yodashkin’s list of DraftKings recommendations Wednesday, this time against the Leafs.
Yahoo DFS Hockey: Wednesday Plays and Strategy
3 days ago
3 days ago
Chris Morgan likes Oilers rearguard Darnell Nurse against Columbus on Wednesday.
Past Fantasy Outlooks
2021
2020
2019
2018
Shesterkin was up and down in his first season as New York's No. 1 goaltender in 2020-21. He played better than his 16-14-3 record suggests, but Shesterkin allowed at least four goals on eight different occasions in addition to missing 10 games in the middle of the year with a groin injury. There was nothing wrong with Shesterkin's 2.62 GAA and .916 save percentage, but both of those numbers could easily improve given the fact the Rangers have made a concerted effort to add grit, toughness, and responsible defensive players to their lineup this offseason. There's top-10 fantasy upside here, if not more, and Shesterkin could be available at a slight discount on draft day.
There's no denying Shesterkin's talent, which was on full display during his 12 brilliant games with the Rangers last season, in which he racked up 10 wins thanks to a .932 save percentage. He's one of the league's most exciting prospects in net, but the path to elite netminding is never smooth, and the Rangers have another young goalie they can turn to in Alexandar Georgiev. Shesterkin showed great poise in limited viewings, but how effective he can remain over an entire season is still up in the air. He has fantastic long-term value in fantasy, but he'll enter the 2020-21 campaign with some inherent risk due to his limited sample size. Still, Shesterkin's upside is essentially unmatched, making him worthy of an early-round pick in most fantasy formats.
Shesterkin is a dynasty leaguer's dream, but his path to immediate playing time is blocked by the duo of Henrik Lundqvist and Alexandar Georgiev in net. The 23-year-old absolutely dominated KHL competition as the goalie for SKA Saint Petersburg -- a powerhouse team in a league that more resembles European soccer with its lack of parity. He posted a minuscule 1.11 GAA along with a .953 save percentage in 28 games last season, and Shesterkin will look to adjust to life in North America quickly so he can challenge Georgiev for the backup job. Expect Shesterkin to start the year in the AHL in order to maximize his playing time, but know that his ceiling is about as high as it gets for a goaltending prospect.
We're at least a season away from the Rangers putting the “York” in Shestyorkin, but it's never too early for dynasty owners to start keeping an eye on one of the best young goaltenders in the world. Shestyorkin has dominated in the KHL over the past two years, backing up a 1.64 GAA and .937 save percentage in 2016-17 with 1.69 and .933 marks last season for SKA Saint Petersburg. The 22-year-old Russian's contract is up at the end of the 2018-19 campaign, and with Henrik Lundqvist getting up there in age, Shestyorkin could contribute right away if the Rangers can coax him into coming over to North America next season.
More Fantasy News