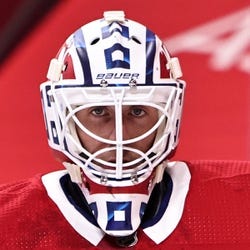 2022 Stats
W
10
L
17
SO
0
GAA
3.58
SV%
.891
ROS Projections
W
L
SO
GAA
SV%
Unlock Our Projections
2022 Fantasy Outlook
With Carey Price (knee) potentially set to miss the entirety of the 2022-23 campaign, and with Sam Montembeault still relatively unproven, Allen should be in for a pretty hefty workload this season. The 32-year-old netminder was limited to 35 appearances in 2021-22 due to injury, going 9-20-4 while posting a 3.30 GAA and a .905 save percentage over that span, but if he's able to stay healthy, Allen should see at least 45-plus starts as Montreal's No. 1 option this year. Although they may be marginally improved after finishing dead last in the Eastern Conference a season ago, the Canadiens almost certainly won't be a playoff team this year, which means Allen's win percentage likely won't improve substantially. Allen probably shouldn't be counted on to be anything more than a No. 3 netminder for your fantasy squad this season. Read Past Outlooks
read more
#