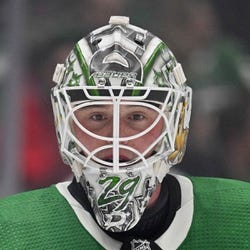 2022 Stats
W
21
L
7
SO
4
GAA
2.26
SV%
.923
ROS Projections
W
L
SO
GAA
SV%
Unlock Our Projections
2022 Fantasy Outlook
Oettinger wasn't a true No. 1 goaltender for Dallas a season ago, as he appeared in just 48 of their 82 regular-season games. He still managed to post 30 victories, while his 2.53 GAA and .914 save percentages were fair, but not excellent. Oettinger's real breakthrough came in the postseason. In the Stars' first-round loss to the Flames, Oettinger finished with a 1.81 GAA and .954 save percentage, including stopping 64 of 67 shots in Calgary's 3-2 overtime win in Game 7. Seeing how well Oettinger played in the playoffs gives real hope that he's the club's long-term answer in goal, but Oettinger -- a restricted free agent -- remained unsigned as of late August, putting his short-term future with the club in some doubt. Read Past Outlooks
read more
#

Calculate Stats Over Time
Just click on any two dates.
Scoring
FanDuel
DraftKings
Yahoo DFS
FantasyDraft
Head2Head
Loading Goalie Game Log...
2022–23 Time On Ice Stats
Stars Depth Chart
Our full team depth charts are reserved for RotoWire subscribers.
Subscribe Now
Recent RotoWire Articles Featuring Jake Oettinger See More
Yahoo DFS Hockey: Friday Picks
Yesterday
Yesterday
Chris Morgan previews Friday’s Yahoo offering, rolling with the Islanders’ Brock Nelson against Detroit.
Yahoo DFS Hockey: Wednesday Plays and Strategy
3 days ago
3 days ago
Chris Morgan likes Oilers rearguard Darnell Nurse against Columbus on Wednesday.
FanDuel NHL: Monday Targets
5 days ago
5 days ago
Jason Chen recommends plenty of Monday DFS options to help you craft an effective FanDuel lineup.
Yahoo DFS Hockey: Monday Picks
5 days ago
5 days ago
Chris Morgan dives into Monday’s Yahoo slate, recommending Flames netminder Jacob Markstrom against the Blue Jackets.
Frozen Fantasy: Stop the Disrespect
6 days ago
6 days ago
Janet Eagleson reviews the Bruce Boudreau situation and recommends a few players who may still available in your leagues.
Past Fantasy Outlooks
2021
2020
A long-term injury to Ben Bishop allowed Oettinger to begin the 2020-21 season with the Stars and he ended up earning more playing time than assumed starter Anton Khudobin. His numbers were excellent (11-8-7, 2.36 GAA, .911 save percentage), and he played the entire season at age 22. Oettinger is a former first-round pick (26th overall, 2017), so the Stars always thought highly of him, but the immediate production was nonetheless surprising. There's no timetable for Bishop's return and Khudobin is 35 years old, so Oettinger would appear to be in the driver's seat to lead what is likely another committee in goal for the Stars heading into the 2021-22 campaign. Oettinger will be a mid-tier fantasy option whenever he gets the call.
Oettinger posted a 15-16-4 record, a 2.57 GAA and a .917 save percentage with three shutouts for AHL Texas in 2019-20. He also made a pair of relief appearances during the parent club's playoff run, turning aside eight shots in 37 minutes. With Ben Bishop expected to be sidelined until March while recovering from knee surgery, Oettinger will be Anton Khudobin's primary backup to begin 2020-21. A solid contributor in the minors, the 21-year-old Oettinger likely won't see more than a handful of games this year, but it will be valuable experience and a measuring stick to see if he can be the Stars' goalie of the future. Dynasty league managers will want to keep an eye on him as a potential asset for the future.
More Fantasy News