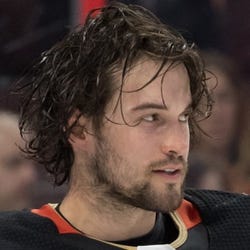 2022 Stats
W
9
L
20
SO
1
GAA
4.07
SV%
.896
ROS Projections
W
L
SO
GAA
SV%
Unlock Our Projections
2022 Fantasy Outlook
Gibson has seemed like a prime change-of-scenery candidate for years, but the Ducks have not yet been willing to make the move, which might be a mistake considering his value would seem to be on the decline given his recent struggles. In 56 games a season ago, Gibson finished with a 3.19 GAA, the worst of his career. His .904 save percentage was right in line with the past two years, while his 18-26-11 record is largely irrelevant because Anaheim was a lousy team. The Ducks signed John Klingberg, Ryan Strome, and Frank Vatrano in unrestricted free agency in hopes of lengthening their lineup, but none of those moves matter much unless Gibson regains the form we saw from him early in his career. Read Past Outlooks
read more
#