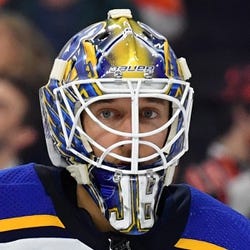 2022 Stats
W
18
L
18
SO
2
GAA
3.27
SV%
.892
ROS Projections
W
L
SO
GAA
SV%
Unlock Our Projections
2022 Fantasy Outlook
Finding himself behind Ville Husso in the pecking order for much of the season, Binnington played in just 37 games for the Blues in 2021-22, posting an 18-14-4 record, a 3.13 GAA and a .901 save percentage. He was better in the playoffs (4-1-0 record, 1.75 GAA in five games) before a knee injury ended his year. With Husso a pending unrestricted free agent, St. Louis dealt his rights to Detroit and signed veteran Thomas Greiss to serve as the team's backup. That leaves Binnington in a stellar position from a fantasy perspective. He should get the lion's share of the starts for the Blues and could easily finish 2022-23 as a low-end No. 1 fantasy goaltender. Read Past Outlooks
read more
#

Calculate Stats Over Time
Just click on any two dates.
Scoring
FanDuel
DraftKings
Yahoo DFS
FantasyDraft
Head2Head
Loading Goalie Game Log...
2022–23 Time On Ice Stats
Blues Depth Chart
Our full team depth charts are reserved for RotoWire subscribers.
Subscribe Now
Recent RotoWire Articles Featuring Jordan Binnington See More
NHL Barometer: Risers and Fallers
8 days ago
8 days ago
This week's set of risers includes Carolina winger Sebastian Aho, who's been in elite form, scoring seven goals in his last four games.
NHL Bets Tonight: Expert NHL Picks for Blues vs. Jets
9 days ago
9 days ago
Dan Dobish dives into the odds for Monday's standalone NHL game between the Blues and Jets and lines up his best bets and player props for the contest.
Yahoo DFS Hockey: Monday Plays and Strategy
9 days ago
9 days ago
Chris Morgan suggests a few players to choose from Monday across a single-game slate.
DraftKings NHL: Monday Breakdown
9 days ago
9 days ago
Chris Morgan makes his picks for Monday’s single-game DraftKings slate.
FanDuel NHL: Monday Targets
9 days ago
9 days ago
Jason Chen previews Monday’s single-game slate between the Jets and Blues.
Past Fantasy Outlooks
2021
2020
2019
2018
2017
2014
2011
Two years after winning the Stanley Cup, Binnington has struggled to maintain the high level of play that helped backstop the Blues to their first championship in 2019. The 28-year-old posted a rather unflattering 2.65 GAA and .910 save percentage behind an 18-14-8 record in 42 starts last season. Blues management appears unconcerned about Binnington's numbers, as they inked their workhorse netminder to a six-year, $36 million extension in March of 2021. With so many key players from the championship roster now gone, it's uncertain whether Binnington will be able to renkindle the magic of his breakout season, but he should be a solid fantasy option once again in 2021-22 based on volume alone.
Binnington was bound to take a step back after a historic, fairy-tale season as a rookie in 2018-19. He finished with 30 wins, third most in the league, but saw both his save percentage and GAA move closer to the league average last year. The real Binnington is probably somewhere in between, and even with free agency looming, the Blues were confident enough to trade Jake Allen to the Canadiens in September. That means Binnington is going to see a lot of playing time in 2020-21, so he'll have a great opportunity to finish in the top five in wins for a second consecutive campaign. Binnington has a short track record, but it's been impressive so far. He should be considered a top-10 option at his position heading into this year's drafts.
Binnington was on waivers at the beginning of last season and the Blues refused to give him his first NHL start until they hit rock bottom. But the rest is history. The 26-year-old's name will forever be etched into Lord Stanley, and the Blues rewarded him with a two-year, $8.8 million contract. This is essentially a prove-it deal, because while his accomplishments were priceless, they were also unprecedented, as no rookie goalie has ever won 16 games in the postseason before. Binnington could be due for some regression from the .927 save percentage and 1.89 GAA he posted in the regular season, especially considering it already slipped to a .914 and 2.46, respectively, in the playoffs. Nevertheless, he clearly has the raw talent to play at the top level, so it's just a matter of whether this can translate over 60 starts in a season. Fantasy owners should be wary of reaching too early here.
Binnington spent the 2017-18 season on loan to AHL Providence, where he posted a dominant .926 save percentage and 17-9-0 record. The 25-year-old will look to return to the Blues' affiliate, AHL San Antonio, this season, but he'll face stiff competition from Evan Fitzpatrick, who is five years younger and coming off a stellar playoff run in Canadian juniors. If Binnington wins the backup job behind Ville Husso in San Antonio, he'll have a chance to prove he deserves a look to be Jake Allen's successor.
Binnington has spent the past four seasons playing for AHL Chicago, and while the results haven't been staggering, he’s done well enough to prove he could be Jake Allen’s backup once Carter Hutton’s contract expires next summer. Last season, he recorded 16-7-3 record with a .911 save percentage and a 2.71 GAA. Binnington is unlikely to play with the Blues this year aside from a game here and there if injuries strike, but keep his name in mind for future seasons.
Binnington, 21, plied his trade with Kalamazoo of the ECHL last season, producing a 2.35 GAA and .922 save percentage in 40 games. The former third-round pick is expected to take his talents to AHL Chicago this season, where he’ll likely serve as the squad’s starter following Jake Allen’s appointment to the top backup spot on the NHL squad. In addition to Allen, the Blues have another promising young netminder in 21-year-old Niklas Lundstrom, but Binnington seems to be further along in his development and likely checks in at No. 3 on Blues’ organizational goalie depth chart.
The 6-2 Binnington turns 18 this year and is coming off a year where played a ton of minutes for the Owen Sound Attack of the Ontario Hockey League. On the surface, a 3.05 GAA and .899 save percentage doesn't look too good, but it won him 27 games.
More Fantasy News