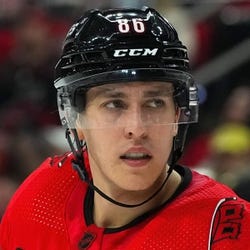 2022 Stats
G
5
A
19
PP Pts
8
+/-
8
PIM
14
ROS Projections
G
A
PP Pts
+/-
PIM
Unlock Our Projections
2022 Fantasy Outlook
Teravainen's overall production a season ago -- 22 goals, 65 points in 77 games -- was right in line with what we have come to expect from him. In fact, there's a case to be made Teravainen underperformed a tad considering his 31 power-play points and 202 shots on goal were both career-best marks. The Finn was banged up in the shortened 2020-21 campaign, but has otherwise been extremely healthy for the vast majority of his career. Teravainen will turn 28 right before training camp begins, so there is no reason to believe there will be any type of physical drop-off forthcoming for a few more seasons. Draft Teravainen with confidence in the middle rounds this coming fall. Read Past Outlooks
read more
#