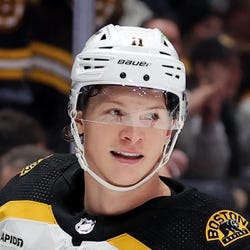 Calculate Stats Over Time
Just click on any two dates.
Scoring
FanDuel
DraftKings
Yahoo DFS
FantasyDraft
Head2Head
Loading Skater Game Log...
2022–23 Time On Ice Stats
Ice Time
Power Play
Short-Handed
2020–21
11:15
0:17
0:16
2021–22
11:39
0:04
0:32
2022–23
11:44
0:02
0:30
Bruins Depth Chart
Our full team depth charts are reserved for RotoWire subscribers.
Subscribe Now
Bruins Power Play Depth Chart
Our full team depth charts are reserved for RotoWire subscribers.
Subscribe Now
Recent RotoWire Articles Featuring Trent Frederic See More
Trade Tips: Buying Back In
31 days ago
31 days ago
This week's set of trade tips includes multiple players who now look interesting after slow starts, such as Calgary's Jonathan Huberdeau.
Frozen Fantasy: My Must-Watch List
48 days ago
48 days ago
Janet Eagleson reviews the players you need to watch live and the ones you may want to add to your fantasy rosters.
Hutch's Hockey: Silly Season
320 days ago
320 days ago
Shawn Hutchinson discusses the lack of trades so far and recommends some players that have started strong in March.
NHL Barometer: Risers & Fallers
March 30, 2021
March 30, 2021
Jason Chen analyzes the risers and fallers in hockey this week, as the Flyers' Sean Couturier remains a premier No. 1 center despite his team's struggles
FanDuel NHL: Sunday Targets
March 28, 2021
March 28, 2021
Jason Chen notes Aaron Ekblad leads all blueliners in power-play goals and figures he'll have a decent chance of adding another man-advantage marker versus the Devils.
Past Fantasy Outlooks
2020
2019
2018
Frederic has appeared in just 17 games at the NHL level over the last two years, and he's still in search of his first point for the Bruins. A first-round pick in 2016, it's likely Frederic makes an impact at some point, but the Bruins have plenty of center depth heading into 2020-21. Barring injuries higher up the depth chart, Frederic will likely settle for a taxi-squad or minor-league job this season. He produced eight goals and 32 points with AHL Providence in 59 games last year -- the scoring potential is there, but he's more of a defensive forward with little hope of more than a bottom-six role in the near future.
Frederic failed to record a point in 15 NHL games last season, but did manage to log 14 goals and 25 points in 55 AHL contests. The 2016 first-rounder could emerge as a solid two-way power forward down the road, but for now, the 6-foot-2, 203-pounder is off the fantasy radar given his lack of production at the top level. The 21-year-old has a chance to earn a spot with the big club out of training camp, but he'll need to display improved instincts on offense in order for that to happen.
Following a strong two-year stint at the University of Wisconsin, Frederic logged five goals and eight points in 13 regular-season games down the stretch for AHL Providence in 2018. The 20-year-old is a big-bodied center who some within the B's organization believe could develop into a Jordan Staal-type down the road. The Bruins raised some eyebrows when they selected Frederic 29th overall in the 2016 NHL Entry Draft, but since then, he's displayed a developing scoring touch that could translate into a top-six role in Boston. In the short term, Frederic should have a chance to compete for the team's No. 3 center job previously handled by Riley Nash.
More Fantasy News