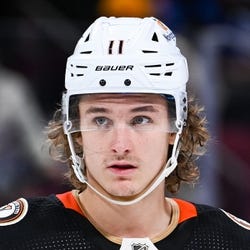 2022 Stats
G
9
A
13
PP Pts
7
+/-
-8
PIM
20
ROS Projections
G
A
PP Pts
+/-
PIM
Unlock Our Projections
2022 Fantasy Outlook
Zegras entered the 2021-22 campaign as a favorite to win the Calder Trophy as NHL Rookie of the Year, and he performed well enough (23 goals, 61 points, including 17 with the man advantage in 75 games) to be nominated as a finalist for the award. Zegras is one of the most dynamic and creative offensive players to have entered the league in recent memory. His vision is exceptional and his shot has long been underrated. The Ducks signed John Klingberg, Ryan Strome and Frank Vatrano in unrestricted free agency this summer in hopes of improving this year, but Zegras, at age 21, is the organization's most valuable asset, both in the long and short term. He'll have both a high floor and a high ceiling from a fantasy perspective in 2022-23. Read Past Outlooks
read more
#