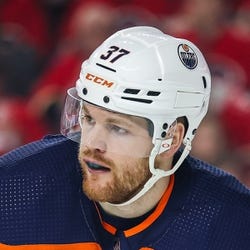 2022 Stats
G
5
A
5
PP Pts
0
+/-
0
PIM
14
ROS Projections
G
A
PP Pts
+/-
PIM
Unlock Our Projections
2022 Fantasy Outlook
Foegele arrived in Edmonton last season and played in all 82 regular-season games for the Oilers. His production -- 12 goals, 26 points -- was right in line with what we had seen from him the prior three seasons with the Hurricanes. Foegele won't turn 27 years old until next April, but he has just three power-play points in his NHL career, and while he managed a career-high 127 hits a season ago, that's not a high enough number to make him an option in that area. Foegele might help the Oilers win hockey games this coming year, but he won't be an asset to your fantasy roster. Read Past Outlooks
read more
#

Calculate Stats Over Time
Just click on any two dates.
Scoring
FanDuel
DraftKings
Yahoo DFS
FantasyDraft
Head2Head
Loading Skater Game Log...
2022–23 Time On Ice Stats
Ice Time
Power Play
Short-Handed
2020–21
14:09
0:05
1:02
2021–22
12:37
0:33
0:10
2022–23
12:27
0:12
0:42
Oilers Depth Chart
Our full team depth charts are reserved for RotoWire subscribers.
Subscribe Now
Oilers Power Play Depth Chart
Our full team depth charts are reserved for RotoWire subscribers.
Subscribe Now
Recent RotoWire Articles Featuring Warren Foegele See More
FanDuel NHL: Tuesday Targets
249 days ago
249 days ago
Jason Chen dives in with his picks for Game 1 of the Western Conference Final between the Avalanche and Oilers on Tuesday.
FanDuel NHL: Tuesday Targets
256 days ago
256 days ago
Jason Chen breaks down Tuesday’s playoff slate, making his picks to help you build a winning lineup.
NHL Playoff Pool Cheat Sheet
282 days ago
282 days ago
Forward, defensemen and goalie rankings for 2022 NHL Playoff Pools.
FanDuel NHL: Monday Targets
334 days ago
334 days ago
Jason Chen previews Monday’s five-game offering, recommending B’s netminder Jeremy Swayman against the visiting Kings.
Past Fantasy Outlooks
2021
2020
2019
2018
Acquired in an offseason trade with Carolina, Foegele has established himself as a reliable middle-six winger and penalty-killer through his first three full seasons in the NHL, scoring 10-plus goals each year despite a lack of meaningful power-play time. His role has limited his fantasy appeal so far, and he's likely slated for a similar assignment with an Oilers team that has been searching for a reliable third line for several years. However, keep a close eye on the situation -- Foegele has the ability to play up in the lineup, and if he finds himself alongside either Connor McDavid or Leon Draisaitl at any point, he'll immediately become a lot more interesting.
Foegele set a career high in points with 30 (13 goals, 17 assists) in only 68 games last year. Three of his 13 goals came shorthanded, showing his speed and skill as a penalty-killer. The 24-year-old winger is still expected to serve in a middle-six role this season, but that hasn't slowed him down recently. Foegele should come in at around 25 points and roughly one hit per outing during the 56-game, 2020-21 campaign. The Ontario native could be a solid depth option in standard fantasy formats.
Foegele is coming off a surprisingly productive postseason in which he tallied five goals and nine points over 15 games, but his regular-season stats were much less impressive. In what was his first full NHL season, the 23-year-old winger delivered 10 goals and 15 points, as well as an ugly minus-17 rating. Foegele should clean up the defensive side of his game a bit with some more experience, but he's destined for a bottom-six role without power-play time, which isn't a recipe for fantasy success.
Foegele spent most of last year representing AHL Charlotte where he finished fifth in team with 46 points, though he ranked second in goals at 28. At the end of the Hurricanes' regular season, Foegele made the most of a two-game showcase, notching a pair of goals and an assist. The 22-year-old winger remains one of the Canes' top prospects, and he could earn an extended look at the NHL level next season if his solid play in the minors continues.
More Fantasy News