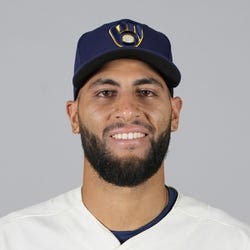 2022 Stats
AVG
.185
HR
10
RBI
35
R
36
SB
2
2023 Projections
AVG
HR
RBI
R
SB
Unlock Our Projections
2023 Fantasy Outlook
Seattle had high hopes for Toro as they liked his approach from both sides of the plate as well as his defensive versatility. Things did not go as planned. Toro was limited to only 109 games after an early season IL stint and spending most of August with Triple-A Tacoma. Toro's maintained a high contact rate, but a 14th percentile average exit velocity and 5th percentile Hard Hit rate hindered production. A 46% flyball rate was wasted with only an 8.3% HR/FB mark. All those flyballs staying in the yard resulted in a .198 BABIP. The Mariners shipped Toro to Milwaukee where he'll be in the second base mix with Owen Miller and Brice Turang. However, Toro is likely ticketed for utility duty with minimal fantasy appeal unless he can get back to driving the ball, though American Family Field is much better power venue than T-Mobile Park. Read Past Outlooks
read more
RANKS
#566
ADP
#

* Exit Velocity and Barrels/PA % are benchmarked against 2019 data (min 400 PA) and Hard Hit Rate is benchmarked against last season's data (min 400 PA). See here for more exit velocity/barrels stats plus an explanation of current limitations with that data set.
BB/K
0.34
BB Rate
6.3%
K Rate
18.5%
BABIP
.198
ISO
.139
AVG
.185
OBP
.239
SLG
.324
OPS
.563
wOBA
.248
Exit Velocity
87.0 mph
Hard Hit Rate
24.0%
Barrels/PA
5.1%
Expected BA
.226
Expected SLG
.372
Sprint Speed
23.5 ft/sec
Ground Ball %
39.5%
Line Drive %
14.4%
Fly Ball %
46.0%
Prospect Rankings History
View Complete Abraham Toro Prospect Ranking History
Advanced Batting Stats
Loading Advanced Batting Stats...
Additional Stats
Games By Position
Defensive Stats
Loading Games Played by Position...
Loading MLB Defensive Stats...
Batted Ball Stats
Loading Batted Ball Stats...
Stats Vs Upcoming Pitchers
Want more matchup stats?
View Abraham Toro vs. Pitcher Stats
Loading Matchup Stats...
Brewers Depth Chart
Our full team depth charts are reserved for RotoWire subscribers.
Subscribe Now
Recent RotoWire Articles Featuring Abraham Toro See More
Todd's Takes: Reviewing the Moves and ADP
52 days ago
52 days ago
Todd Zola breaks down the early rush of offseason moves. Does Jacob deGrom's deal with the Rangers imply anything about his health?
The Z Files: NFBC Holdem Rankings and Strategies
113 days ago
113 days ago
Todd Zola shares his gameplan and his rankings for NFBC Postseason Holdem contests.
MLB: Postseason Cheat Sheet and Strategy
117 days ago
117 days ago
Todd Zola tackles the MLB Postseason Cheat Sheet for RotoWire and discusses his approach to postseason leagues this year.
Collette Calls: Shifting Expectations
131 days ago
131 days ago
Jason Collette examines a handful of spray charts in search of hitters who will particularly benefit from the shift ban.
AL FAAB Factor: Waiver Pickups of the Week
149 days ago
149 days ago
Erik Siegrist checks out the American League waiver wire after September roster expansion as Gunnar Henderson provides a boost to Baltimore's playoff push.
Past Fantasy Outlooks
2022
2021
2020
After Houston's July 26 game with Seattle, Toro was slashing .211/.287.385. The Astros traded him the next day and Toro switched dugouts. He went on to hit .252/.328/.367 the rest of the way, though the Mariners gave Toro more playing time. Six of Toro's 11 homers came in an 18-day period, three before the deal and three after. Toro's contact rate is league average with a walk rate below the norm. Entering his age-25 season, Toro has time on his side, but his batted ball profile suggests only moderate improvement over last season's final .239/.315.373. Seattle must agree since they've indicated Toro will get outfield reps in the spring, implying he will be more of a utilityman than regular third baseman, which is where he primarily played with Seattle. Even with regular playing time, Toro isn't mixed-league worthy as a starter, but his flexibility could serve as a useful bench piece in deeper formats.
Toro had some preseason helium last year as a sleeper and saw regular action with the Astros in August and early September, but the 24-year-old didn't capitalize on the opportunity. The switch hitter has flashed excellent contact skills and some power potential in the high minors, but so far in his big-league career he's had trouble elevating the ball to take full advantage of the latter. He has the defensive chops to handle a starting assignment at the hot corner, but with Alex Bregman locked in at third base, Toro will have to settle for a utility role, and perhaps not even as the primary one on the bench with Aledmys Diaz still around. Toro still has time to put things together, but as was the case in 2020, he'll likely need injuries to open a path to consistent playing time.
An assault on Double-A (153 wRC+) and Triple-A (179 wRC+) pitching combined with defensive competency at third base led to Toro making his big-league debut in August while the Astros were short-handed in the infield. He simplified his swing in 2018 while playing in the Arizona Fall League and those adjustments led to him being the best hitter in the Texas League after being a below-average hitter (89 wRC+) in 50 games there in 2018. A switch hitter who turned 23 this offseason, Toro excels at making contact and walked over 10% of the time at all three stops. His groundball rate was elite in the minors (under 40% at Double-A and Triple-A), but a 50.0 GB% contributed to his struggles in a small sample in the majors. He could be a plus hitter with above-average power, but is blocked at his three positions (third base, second base and designated hitter) to begin the season.
More Fantasy News