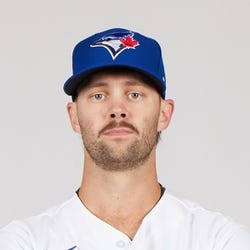 * Exit Velocity, Barrels/BBE %, Balls Hit 95+ MPH %, and Spin Rate are benchmarked against 2019 data (min 30 IP). See here for more exit velocity/barrels stats plus an explanation of current limitations with that data set.
K/BB
4.46
K/9
7.4
BB/9
1.7
HR/9
0.8
Fastball
86.5 mph
ERA
2.80
WHIP
1.12
BABIP
.298
GB/FB
1.46
Left On Base
72.2%
Exit Velocity
81.8 mph
Barrels/BBE
4.7%
Spin Rate
2269 rpm
Balls Hit 95+ MPH
25.9%
Swinging Strike
9.6%
Advanced Pitching Stats
Loading Advanced Pitching Stats...
Defensive Stats
Loading MLB Defensive Stats...
Stats Vs Today's Lineup
Want more matchup stats?
View Adam Cimber vs. Batter Stats
Loading Matchup Stats...
Blue Jays Depth Chart
Our full team depth charts are reserved for RotoWire subscribers.
Subscribe Now
Recent RotoWire Articles Featuring Adam Cimber
Closer Encounters: 2022 Saves in Review, Part 2
45 days ago
45 days ago
Ryan Rufe recaps the saves landscape in this year's NFBC Main Event and shares his own hits and misses from this past season.
Closer Encounters: 2022 Saves in Review, Part 1
51 days ago
51 days ago
Ryan Rufe recaps this past season's saves landscape. Just how many teams preferred closer committees over the conventional approach?
MLB: Postseason Cheat Sheet and Strategy
57 days ago
57 days ago
Todd Zola tackles the MLB Postseason Cheat Sheet for RotoWire and discusses his approach to postseason leagues this year.
Collette Calls: Scoring Tweaks
63 days ago
63 days ago
Jason Collette advocates for more experimentation with scoring setups in order to give fantasy relevance to a larger pool of pitchers.
Collette Calls: Looking Ahead
93 days ago
93 days ago
Jason Collette examines a pair of pitchers who could be next season's breakout reliever.
Past Fantasy Outlooks
2022
2021
2020
2019
Cimber enjoyed his best season to date, logging a career-best 2.26 ERA and 1.07 WHIP over a career-high 71.2 innings between Miami and Toronto. The submariner's mid-80s fastball and slider combination forced plenty of weak contact, as his 3.8% barrel percentage was in the 96th percentile and his 0.3 HR/9 was third-best in the league among qualified relievers. He induced plenty of grounders (53.8% GB%) and kept free passes to a minimum with a 5.6% walk rate. Cimber began the year in a middle relief role for Miami, but once he was traded to Toronto he began to get more high-leverage work. His 2022 role depends on whether or not the Blue Jays address their bullpen in free agency. He's unlikely to close as he has just two career saves on his resume, but should settle in somewhere between the sixth and eighth innings for Toronto.
This player will receive an outlook for the 2021 fantasy baseball season.
Cimber proved once again in 2019 that he's one of Cleveland's top options out of the bullpen, and while he finished with a 4.45 ERA and 1.32 WHIP over 56.2 innings, he also registered 19 holds and his first career save. The 29-year-old reliever watched his K/9 drop and his walk totals rise in 2019, though his BABIP improved to .287 after sitting at .318 during the 2018 season. His strikeout numbers could be a concern for fantasy owners, especially with a fastball that sits in the mid-80s, but he's shown through his first two big-league seasons that he can be effective. Cimber's role isn't expected to change much heading into the upcoming 2020 campaign with the Indians, as he should slot into a late-innings role yet again, and he could also be in the conversation for saves if Brad Hand should struggle with his health like he did last year.
It takes but one time watching Cimber pitch to see what his lot in baseball life should be. If you were to build the perfect ROOGY pitcher, Cimber would fit the mold. His drop-down arm angle and delivery are brutal on righties. They hit just .235/.273/.337 against him last year in nearly 200 plate appearances. When manager Terry Francona needed to squelch a rally with a double play, or had a tough righty slugger coming up with runners in scoring position, Cimber was the guy to use. Conversely, Cimber should never see the light of day against a lefty in anything but a low-leverage situation because the same things that make him great against righties expose him to high damage against lefties. It is unlikely this path will change because getting better against lefties will involve him changing what makes him so tough on righties.
More Fantasy News