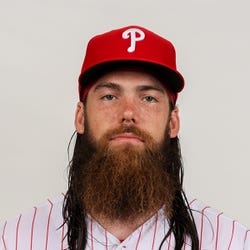 2022 Stats
AVG
.245
HR
11
RBI
52
R
49
SB
10
2023 Projections
AVG
HR
RBI
R
SB
Unlock Our Projections
2023 Fantasy Outlook
Marsh was a well-regarded prospect, but after he hit .239/.299/.354 in his first 583 plate appearances, the Angels decided to move on. They traded him to the Phillies at the deadline in exchange for catcher Logan O'Hoppe. Marsh would miss time after crashing into an outfield wall, but the change of scenery seemed to do him well as he slashed .288/.319/.455 in 41 games down the stretch in the regular season, numbers propped up by a .398 BABIP. Entering his age-25 campaign, Marsh remains a work in progress with his only bankable skill being speed. He has struck out in more than one-third of his big-league PA to date. The fact that he was able to hit 11 homers and steal 10 bases last season between Los Angeles and Philadelphia speaks to his natural ability and athleticism. but until he's able to make more contact, he will have a lid on his fantasy upside. Read Past Outlooks
read more
RANKSFrom Preseason
#