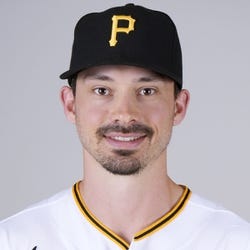 2022 Stats
AVG
.262
HR
27
RBI
62
R
74
SB
7
2023 Projections
AVG
HR
RBI
R
SB
Unlock Our Projections
2023 Fantasy Outlook
2022 was another year of the perpetual rebuild in Pittsburgh where little went well, but that did not stop Reynolds from building off his successful 2021 campaign. The batting average fell as Reynolds continues a cycle of BABIP peaks and valleys year after year, but he set a career high in homers and steals while compiling for an otherwise dreadful lineup. Only he, Cal Raleigh, and Byron Buxton hit as many as 25 homers while failing to score 75+ runs or drive in 65+. Buxton played in many fewer games than Reynolds while the rest of Raleigh's profile is distant from Reynolds's production. The low run production just speaks to the surrounding cast issues for Reynolds which will continue unless the club trades him now that he is into his arbitration years. Their track record says they will, and a relocation would be a nitrous-oxide boost to his fantasy value in 2023. Read Past Outlooks
read more
RANKS
#86
ADP
#

* Exit Velocity and Barrels/PA % are benchmarked against 2019 data (min 400 PA) and Hard Hit Rate is benchmarked against last season's data (min 400 PA). See here for more exit velocity/barrels stats plus an explanation of current limitations with that data set.
BB/K
0.40
BB Rate
9.1%
K Rate
23.0%
BABIP
.306
ISO
.199
AVG
.262
OBP
.345
SLG
.461
OPS
.807
wOBA
.352
Exit Velocity
90.2 mph
Hard Hit Rate
29.8%
Barrels/PA
5.2%
Expected BA
.249
Expected SLG
.416
Sprint Speed
23.6 ft/sec
Ground Ball %
43.2%
Line Drive %
22.1%
Fly Ball %
34.7%
Prospect Rankings History
View Complete Bryan Reynolds Prospect Ranking History
Advanced Batting Stats
Loading Advanced Batting Stats...
Additional Stats
Games By Position
Defensive Stats
Loading Games Played by Position...
Loading MLB Defensive Stats...
Batted Ball Stats
Loading Batted Ball Stats...
Stats Vs Upcoming Pitchers
Want more matchup stats?
View Bryan Reynolds vs. Pitcher Stats
Loading Matchup Stats...
Pirates Depth Chart
Our full team depth charts are reserved for RotoWire subscribers.
Subscribe Now
Recent RotoWire Articles Featuring Bryan Reynolds See More
Collette Calls: 2023 AL Central Bold Predictions
4 days ago
4 days ago
Jason Collette tackles the AL Central with his latest set of bold predictions, featuring the case for Akil Baddoo, Brady Singer, Nick Gordon and more.
MLB Roundtable Rankings: 2023 Fantasy Baseball Top 300
5 days ago
5 days ago
From Trea Turner to Spencer Torkelson, RotoWire's Roundtable Rankings crew offers their combined top 300 fantasy baseball rankings.
Todd's Takes: Wrapping Up Last Year's Moves
19 days ago
19 days ago
Todd Zola tackles another large set of offseason moves, including big names like Carlos Rodon as well as several players to consider late in drafts.
2023 Fantasy Baseball Rankings - Way Too Early Top 300 Draft Ranks
109 days ago
109 days ago
James Anderson provides a way too early top 300 rankings for those who have the itch to start drafting for 2023.
FanDuel MLB: Sunday Targets
127 days ago
127 days ago
Chris Morgan has offered a couple promising value plays, including Bryan Reynolds facing Adam Wainwright and the playoff-locked Cardinals.
Past Fantasy Outlooks
2022
2021
2020
2017
After a disappointing 2020 season, Reynolds bounced back in a major way. Reynolds and Juan Soto were the only two hitters in 2021 with a batting average north of .300 to go along with more than 90 runs, 90 RBI, 20 homers and five steals. Both his strikeouts (18.4 K%) and BABIP (.345) improved. While he has just been in the league for three seasons, Reynolds has developed a good, not great profile. He's not a zero in any one category, but fantasy managers are always looking for more than roughly 25 homers and five stolen bases. His walk rate jumped to a career-high 11.6% as pitchers no longer throw him fastballs (49% to 46% to 44%). As a switch hitter, he's been better against righties (.874 OPS), but not a drag against lefties (.817 OPS). His near-.300 average is the key for his fantasy value. We saw in 2020 what the downside looks like, but at the same time, there aren't any obvious holes in his game.
Reynolds was red-hot upon arrival in 2019, slashing .314/.377/.503 across 546 PA with the Pirates and finishing fourth in the NL Rookie of the Year vote. Cold water rained down in the form of a .189/.275/.357 slash line in his sophomore season. His strikeout rate shot up to 27.4% in 2020 and most of the batted-ball numbers provide little reason optimism, although Reynolds did up his barrel rate to a respectable 10,2% while also improving his walk rate to 10.1%. The Pirates need to determine which version of Reynolds is real; is it the three-plus win outfielder or something closer to the replacement-level player we saw in 2020? He does not seem to have many fans left in fantasy -- we can be fickle creatures -- but it makes sense that most find it tough to get excited considering the team context and lack of speed.
Reynolds, who was acquired from the Giants in the Andrew McCutchen trade, opened the season with Triple-A Indianapolis, where he hit .367 with five homers in 13 games before getting called up to the majors to replace the injured Starling Marte. The outfielder kept on hitting following his promotion, kicking off his big-league career with an 11-game hitting streak and finishing the season with a .314/.377/.503 triple-slash and 16 homers in 546 plate appearances. While Reynolds struggled down the stretch (.230 AVG in September), showed platoon splits (.756 OPS vs. LHP, .931 OPS vs. RHP) and ultimately benefitted from a .387 BABIP, the underlying numbers largely support his breakout. He isn't a flashy pick, but the switch hitter provides a nice floor thanks to his strong batting average and placement near the top of Pittsburgh's lineup -- he primarily hit second last year, which led to 83 runs.
Reynolds was one of the surprises of the draft. Pegged as a clear first-round talent, he fell to the Giants at pick 59, receiving an over-slot $1.35 million bonus. He lived up to his billing as a quality hitter, particularly with short-season Salem-Keizer (141 wRC+), but after getting promoted to Low-A Augusta in August, some strikeout issues began to surface. A 30.3 percent strikeout rate and 4.5 percent walk rate would not be overly alarming for a prep hitter getting his first taste of pro ball, but it was less excusable for a bat-first player from the SEC. His 124 wRC+ in a small sample at Low-A looks solid, but a .452 BABIP was largely to blame for his success there. Reynolds is destined for left field, as he lacks the tools and instincts for center field and lacks the arm for right field. This means he will have to really hit in the coming years while also improving his approach. There's a 20-homer/20-steal left fielder here if you squint hard enough, and that's enough to warrant ownership in leagues where 200 prospects are rostered.
More Fantasy News