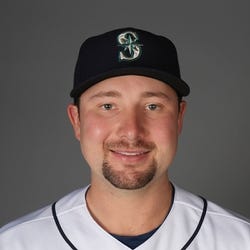 Out
Injury Thumb
Est. Return 2/1/2023
2022 Stats
AVG
.211
HR
27
RBI
63
R
46
SB
1
2023 Projections
AVG
HR
RBI
R
SB
Unlock Our Projections
2023 Fantasy Outlook
All aboard the Big Dumper express! Raleigh earned the moniker from Jarred Kelenic with his breakout sophomore season hitting timely homers with stellar defense as Raleigh seemingly aimed to remind Seattle what they once had in Mike Zunino. Raleigh's batting average was nothing to write home about as it hovered there most of the season with some peaks (.254 in down the stretch) and valleys (.136 into June), but his 121 wRC+ was well above the 89 figure the catching position as a whole produced league-wide. Like Zunino, the story here is raw power and Raleigh has plenty of it with the ability to launch a baseball to all fields with a prevalance to crank and yank them down the right field line. His numbers against righties and lefties are nearly identical and the defense means he is the primary catcher as long as the recovery from offseason hand surgery goes well. He is one of the primary reasons the catching position is no longer considered a black hole as he went from undraftable in 15 team leagues last season to a likely top 8 catcher on draft boards this season. Read Past Outlooks
read more
RANKS
#148
ADP
#

* Exit Velocity and Barrels/PA % are benchmarked against 2019 data (min 400 PA) and Hard Hit Rate is benchmarked against last season's data (min 400 PA). See here for more exit velocity/barrels stats plus an explanation of current limitations with that data set.
BB/K
0.31
BB Rate
9.2%
K Rate
29.4%
BABIP
.226
ISO
.278
AVG
.211
OBP
.284
SLG
.489
OPS
.774
wOBA
.333
Exit Velocity
90.9 mph
Hard Hit Rate
36.8%
Barrels/PA
9.4%
Expected BA
.216
Expected SLG
.461
Sprint Speed
22.5 ft/sec
Ground Ball %
28.5%
Line Drive %
15.8%
Fly Ball %
55.7%
Prospect Rankings History
View Complete Cal Raleigh Prospect Ranking History
Advanced Batting Stats
Loading Advanced Batting Stats...
Additional Stats
Games By Position
Defensive Stats
Loading Games Played by Position...
Loading MLB Defensive Stats...
Batted Ball Stats
Loading Batted Ball Stats...
Stats Vs Upcoming Pitchers
Want more matchup stats?
View Cal Raleigh vs. Pitcher Stats
Loading Matchup Stats...
Mariners Depth Chart
Our full team depth charts are reserved for RotoWire subscribers.
Subscribe Now
Recent RotoWire Articles Featuring Cal Raleigh See More
Rookie Hitter Tiers 1.0
8 days ago
8 days ago
James Anderson releases Vol. 1 of his rookie hitter tiers for 2023 value only, in which Orioles infielder Gunnar Henderson is in a tier of two at the top.
Collette Calls: 2023 AL East Bold Predictions
15 days ago
15 days ago
Jason Collette shares his bravest takes on 10 AL East players, including arguments for buying Brandon Lowe and passing on Carlos Rodon.
2023 Fantasy Baseball Rankings - Way Too Early Top 300 Draft Ranks
104 days ago
104 days ago
James Anderson provides a way too early top 300 rankings for those who have the itch to start drafting for 2023.
Collette Calls: Hitting Bold Predictions Reviews
112 days ago
112 days ago
Jason Collette looks back at his bold predictions from last offseason, examining what went right and what went wrong.
The Z Files: NFBC Holdem Rankings and Strategies
114 days ago
114 days ago
Todd Zola shares his gameplan and his rankings for NFBC Postseason Holdem contests.
Past Fantasy Outlooks
2022
2021
Raleigh is a fairly interesting prospect but struggled to a .180/.223/.309 line in his 47-game MLB debut last year after posting a far superior .324/.377/.608 line in 44 games for Triple-A Tacoma. His underlying numbers in the majors suggest he deserved that poor performance, as he combined a 35.1 percent strikeout rate with a 4.7 percent walk rate, but the Mariners clearly believe he'll do better going forward. He'll compete for playing time at catcher this spring but could win the bulk of playing time.
Raleigh was a third-round draft pick by Seattle in the 2018 draft out of Florida State. He had a solid debut in the rookie leagues, hitting .288/.367/.534 for short-season Everett, but took off with power in 2019, combining for 29 homers while playing in the California and Texas leagues. The scouting reports always said he could hit for power from either side of the plate, and there is nothing long-term in the way preventing Raleigh from being a fantasy factor in Seattle as early as the 2022 season. In keeper leagues, you will want to get ahead of the curve for a catcher like this with above-average potential at a position where such players are tough to find most years. It would be a surprise to see Raleigh in the big leagues in 2021 for anything more than a cup of coffee.
More Fantasy News