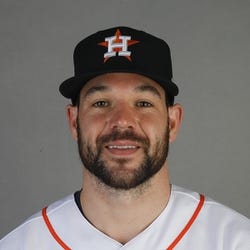 2022 Stats
AVG
.245
HR
14
RBI
44
R
47
SB
4
2023 Projections
AVG
HR
RBI
R
SB
Unlock Our Projections
2023 Fantasy Outlook
McCormick began 2022 as the strong side of a platoon in center field and had a .676 OPS through the first three months of the campaign, but he came alive during the second half of the season with a .271/.356/.416 slash line, and he carried that success into the first half of the playoffs while working as the Astros' primary center fielder. He finished the season with a 114 wRC+ improved his strikeout and walk rates to 26.0 percent and 11.3 percent respectively, though the strikeout rate could use another improvement. Kyle Tucker is cemented in right field while Yordan Alvarez should split time between left field and designated hitter, so there's plenty of at-bats up for grabs in Houston's outfield. The strong second half and playoff performance should give McCormick a leg up for a starting job to enter spring training. He could be a fantasy asset if able to build on that performance, though he shouldn't be counted on as more than a sleeper or depth option. Read Past Outlooks
read more
League Majors
Bats R
Throws L
40 Man Yes
Height 6'0"
Weight 208
DOB 4/19/1995
Born West Chester, PA
College Millersville
Drafted 21st Rd 2017 HOU
$Signed a contract with the Astros in June of 2017.

* Exit Velocity and Barrels/PA % are benchmarked against 2019 data (min 400 PA) and Hard Hit Rate is benchmarked against last season's data (min 400 PA). See here for more exit velocity/barrels stats plus an explanation of current limitations with that data set.
BB/K
0.43
BB Rate
11.3%
K Rate
26.0%
BABIP
.308
ISO
.162
AVG
.245
OBP
.332
SLG
.407
OPS
.738
wOBA
.329
Exit Velocity
88.1 mph
Hard Hit Rate
29.9%
Barrels/PA
6.4%
Expected BA
.232
Expected SLG
.414
Sprint Speed
23.1 ft/sec
Ground Ball %
43.1%
Line Drive %
21.8%
Fly Ball %
35.1%
Advanced Batting Stats
Loading Advanced Batting Stats...
Additional Stats
Games By Position
Defensive Stats
Loading Games Played by Position...
Loading MLB Defensive Stats...
Batted Ball Stats
Loading Batted Ball Stats...
Stats Vs Upcoming Pitchers
Want more matchup stats?
View Chas McCormick vs. Pitcher Stats
Loading Matchup Stats...
Astros Depth Chart
Our full team depth charts are reserved for RotoWire subscribers.
Subscribe Now
Recent RotoWire Articles Featuring Chas McCormick
MLB DFS Picks: FanDuel Plays and Strategy for Thursday, November 3
36 days ago
36 days ago
Chris Morgan looks over the options for Game 5 of the World Series and recommends loading up on Astros, including Kyle Tucker.
DraftKings MLB: Thursday Breakdown
36 days ago
36 days ago
Chris Morgan’s Game 5 World Series picks include Philly’s Bryce Harper.
DraftKings MLB: Wednesday Breakdown
37 days ago
37 days ago
Game 4 goes Wednesday night in Philly, and Dan Marcus has your DraftKings player recommendations.
FanDuel MLB: Tuesday World Series Targets
38 days ago
38 days ago
Chris Bennett previews Game 3 of the World Series on Tuesday, making his picks to help lead you to FanDuel success.
DraftKings MLB: Tuesday Breakdown
39 days ago
39 days ago
Dan Marcus looks over Game 3 of the World Series on Tuesday, providing some insights for crafting an effective DraftKings lineup.
Past Fantasy Outlooks
2022
2021
McCormick made his MLB debut in 2021, seeing only sporadic playing time for the first half of the season while serving as the fourth outfielder in Houston. He showed promise in that span, racking up 10 home runs across 162 plate appearances. However, things went downhill after he took over an everyday role in the aftermath of Myles Straw being traded. While progressing through the minor leagues, McCormick's primary skills were making contact, reaching base regularly and stealing bases. Contrarily, in his first taste of the major leagues, he struck out at a 32.5% clip and attempted only six stolen bases across a total of 320 plate appearances. After a hot start as a power hitter (.264 ISO in first half), he managed only nine extra-base hits across 144 second-half plate appearances. Looking ahead, McCormick's strong defense should continue to earn him playing time, though he'll have to make significant improvements to make an impact in most fantasy formats.
McCormick was a 21st round pick in the 2017 MLB Draft and has steadily progressed through the Astros' minor-league system since. That culminated with his inclusion on both the wild card and ALDS rosters, though he didn't enter a game. While McCormick flashed a bit of power at hitter-friendly Triple-A Round Rock in 2019, he had failed to at any other time in his minor-league career. Instead, his speed is his primary asset - both as a corner outfielder and baserunner. Since reaching Double-A in 2018, McCormick has successfully stolen 28 bases on 36 attempts. McCormick should project to earn some playing time in the Astros' outfield in 2021 - particularly if George Springer and Josh Reddick depart. His long-term fit remains in question however, as he fits best defensively as a corner outfielder, though it's doubtful that he consistently produces enough power to command regular playing time at the position.
More Fantasy News