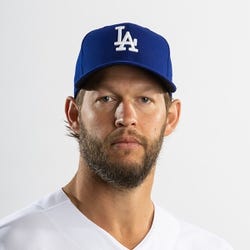 2022 Stats
W-L
12-3
ERA
2.28
WHIP
0.94
K
137
SV
0
2023 Projections
W-L
ERA
WHIP
K
SV
Unlock Our Projections
2023 Fantasy Outlook
Old man river keeps on running, and it appears he will continue trickling out to the mound for the Dodgers as long as his body holds up in 2023. The only skills he lacks these days are velocity and good health as he has not made 30 starts since the 2015 season and his fastball is clinging on to the good side of 90 MPH by a stitch of the baseball. Yet, there are few pitchers better at their craft like Kershaw when he is right physically as his elite breaking stuff is the main course after his fastball command has set the table. We could go on all day with superlatives about his real pitching, but his fantasy projections must consider the fact he has missed about a third of the season each of the past two seasons with different issues and that is not a skill which gets better with age. You will get ace stuff most of the time when he takes the ball, but you have to be prepared for him to have at least one stint on the IL each season. Read Past Outlooks
read more
RANKS
#128
ADP
#