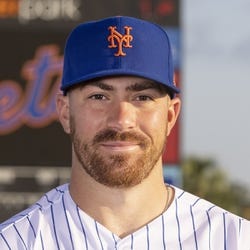 * Exit Velocity and Barrels/PA % are benchmarked against 2019 data (min 400 PA) and Hard Hit Rate is benchmarked against last season's data (min 400 PA). See here for more exit velocity/barrels stats plus an explanation of current limitations with that data set.
BB/K
0.30
BB Rate
6.6%
K Rate
21.7%
BABIP
.352
ISO
.155
AVG
.289
OBP
.343
SLG
.443
OPS
.786
wOBA
.346
Exit Velocity
86.8 mph
Hard Hit Rate
24.0%
Barrels/PA
2.8%
Expected BA
.229
Expected SLG
.327
Sprint Speed
23.4 ft/sec
Ground Ball %
42.5%
Line Drive %
24.7%
Fly Ball %
32.9%
Advanced Batting Stats
Loading Advanced Batting Stats...
Additional Stats
Games By Position
Defensive Stats
Loading Games Played by Position...
Loading MLB Defensive Stats...
Batted Ball Stats
Loading Batted Ball Stats...
Stats Vs Upcoming Pitchers
Want more matchup stats?
View Danny Mendick vs. Pitcher Stats
Loading Matchup Stats...
Recent RotoWire Articles Featuring Danny Mendick
AL FAAB Factor: Waiver Pickups of the Week
158 days ago
158 days ago
Erik Siegrist scopes out the waiver options in the AL as top Rays prospect Josh Lowe gets another shot at proving he's ready to handle big-league pitching.
MLB FAAB Factor: Waiver Pickups of the Week
161 days ago
161 days ago
Jason Shebilske breaks down this week's top pickups, with rookies Riley Greene and Oneil Cruz warranting big bids wherever they're still available.
AL FAAB Factor: Waiver Pickups of the Week
165 days ago
165 days ago
Erik Siegrist looks over the AL free-agent pool as Riley Greene headlines a trio of promising young hitters arriving in or returning to the majors.
Past Fantasy Outlooks
2021
2020
In his 49 games with the White Sox across the last two seasons, Mendick has logged playing time at second base, third base and shortstop. His playing time unexpectedly increased in 2020 after Nick Madrigal was sidelined with a shoulder injury and Yoan Moncada missed an early portion of the campaign with a COVID-19 diagnosis. Mendick has a profile stereotypical of a utility infielder, capable of making contact at a decent rate but lacking significant power. Notably, he has just a .144 ISO across 154 major-league plate appearances and has barreled only two balls in 111 batted ball events. Though Mendick was able to rack up steals in the upper levels of the minors, he has shown average to below-average sprint speed and has yet to steal a bag with the White Sox. Entering 2021, he will have the chance to maintain his utility role and could be the primary backup at second base, third base and shortstop.
Mendick made his big-league debut in September, hitting .308 with a pair of homers in 40 trips to the plate. In a larger sample of 133 games for Triple-A Charlotte, he hit .279/.368/.444 (109 wRC+) with 17 homers and 19 steals. Mendick was never highly rated as a prospect, but he should have enough of a skillset to make it as a bench player in the majors. It's possible that at-bats are available at second base early in the season, but Nick Madrigal should be arriving soon and occupying the position for the foreseeable future, if all goes well. Mendick can take a walk and steal a handful of bases, which could keep him somewhat relevant in AL-only leagues if he does end up with unexpected playing time, but he doesn't have the power to make a significant impact in most formats.
More Fantasy News