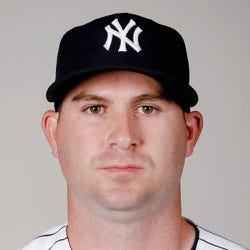 * Exit Velocity, Barrels/BBE %, Balls Hit 95+ MPH %, and Spin Rate are benchmarked against 2019 data (min 120 IP). See here for more exit velocity/barrels stats plus an explanation of current limitations with that data set.
K/BB
1.62
K/9
5.8
BB/9
3.6
HR/9
1.3
Fastball
92.5 mph
ERA
4.53
WHIP
1.48
BABIP
.302
GB/FB
1.15
Left On Base
72.6%
Exit Velocity
82.5 mph
Barrels/BBE
4.9%
Spin Rate
2326 rpm
Balls Hit 95+ MPH
23.8%
Swinging Strike
8.8%
Advanced Pitching Stats
Loading Advanced Pitching Stats...
Defensive Stats
Loading MLB Defensive Stats...
Stats Vs Today's Lineup
Want more matchup stats?
View Drew Hutchison vs. Batter Stats
Loading Matchup Stats...
Recent RotoWire Articles Featuring Drew Hutchison
DraftKings MLB: Friday Breakdown
66 days ago
66 days ago
Chris Morgan likes Corbin Burnes against Miami on Friday as the Marlins are 28th in runs scored and 27th in team OPS.
Weekly Pitcher Rankings: And Then There Was One
72 days ago
72 days ago
Robbie Ray tops Todd Zola's weekly pitcher rankings thanks to a pair of home matchups against a pair of struggling opponents.
FanDuel MLB: Saturday Targets
72 days ago
72 days ago
Chris Bennett features a few reasonably-salaried pitchers and hitters.
DraftKings MLB: Saturday Breakdown
72 days ago
72 days ago
Framber Valdez has been excellent all season and Chris Morgan doesn't see that form dipping against the Orioles.
Yahoo DFS Baseball: Saturday Picks
72 days ago
72 days ago
Chris Morgan doesn't have much confidence in Chad Kuhl at Coors Field and has selected a few Padres to take advantage of the altitude.
Past Fantasy Outlooks
2017
2016
2015
2014
2013
Hutchison was the haul for Pittsburgh in the deadline money dump for Francisco Liriano and prospects Reese McGuire and Harold Ramirez. Pirates general manager Neal Huntington believes the organization can turn the right-hander into a key piece of Pittsburgh's rotation, but the initial results weren't particularly positive. Hutchison allowed seven earned runs in 11.1 innings for the Bucs in September after compiling a 4.50 ERA in 36 innings for Triple-A Indianapolis. At one time he was a promising prospect with Toronto, when he went 14-5 with a 2.53 ERA and 1.04 WHIP in 149.1 minor league innings in 2011. Injuries have curtailed his progress since then and it remains to be seen whether the 26-year-old can rekindle his magic. He'll get every chance to show his stuff in spring training, given the Pirates' lack of established starting pitching behind Gerrit Cole, Jameson Taillon and Ivan Nova.
Hutchison had a tough season in 2015. The Opening Day starter at first glance looked like he had a strong season, going 13-5. However, even a cursory dive into his statistics reveals a vastly different performance. He was even sent down to Triple-A Buffalo at one point, but he still ended up as the worst pitcher in the Jays’ staff (given the success of Marco Estrada). With a fastball that sits around 92 mph and a slider and changeup to go with it, Hutchison has all of the tools to be a strong piece of the team’s rotation; however, a penchant for giving up home runs makes him a risky play. Furthermore, he received incredible run support, getting an average of 6.85 runs per game started, which would have put him in first by nearly a full run had he qualified.
Hutchison returned from Tommy John surgery with what can only be considered a resounding success. Don’t let the ERA fool you. He had some rough spots, but the bulk of his season was fantastic. He had a severe home/road split favoring the road to start the season only to flip halfway through, and he started getting shellacked away from Toronto. By season’s end, the split was virtually nonexistent, so there is no need to read into any of it. He had some rough spots (nine starts of five-plus ER), but he also had runs of dominance, including his final seven starts during which he had a 3.32 ERA in 41 innings with 57 strikeouts and a 4.4 K/BB ratio. His swinging strike rate (11%) was 14th among qualified starters, giving his 23.4% strikeout rate credibility. On the downside, he has a sharp platoon split that does deserve attention as his changeup allowed seven of his 23 homers. He needs to refine both his fastball and changeup against lefties to cut down the .811 OPS allowed against southpaws (righties were at .615). This is a growth profile worth buying.
Hutchison spent most of 2013 rehabbing from Tommy John surgery, before working his way up through the minors late in the season. He never reached the majors and struggled from an ERA perspective in the minors, but Hutchison did strike out 42 batters over 35.1 innings across three levels. Given that he produced a respectable 4.60 ERA in 11 starts with the Blue Jays during the 2012 season, Hutchison could be a candidate for the 2014 starting rotation, even though he hasn't spent significant time at any level of the minors above High-A ball. Still just 23 years old, Hutchison remains one of the better young pitchers in the Toronto organization, despite missing more than a year following Tommy John surgery.
Hutchison became a surprise callup for the Jays when the need for a starter arose in April. As a 21-year-old with just six career starts at Double-A, he fared reasonably well with a 7.5 K/9 and 3.1 BB/9 over 11 starts before elbow trouble sent him to the disabled list in June. The initial diagnosis required a shutdown period, but it was determined in early August that he needed to undergo Tommy John surgery. As a result of the delay, Hutchison will likely miss a significant portion of the 2013 season while rehabbing his way back.
More Fantasy News