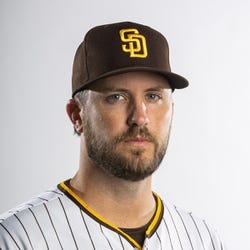 Out
Injury Elbow
Est. Return 2/1/2023
2022 Stats
W-L
0-0
ERA
0.00
WHIP
0.00
K
0
SV
0
2023 Projections
W-L
ERA
WHIP
K
SV
Unlock Our Projections
2023 Fantasy Outlook
Pomeranz had flexor tendon surgery in August 2021 and missed all of last season after experiencing a setback during his rehab process, which yielded just 4.2 innings in the minors before he was shut down. The southpaw has now missed time during each of the past five seasons, including lengthy absences in three of those five. Now 34, Pomeranz enters his 13th season in the majors as a huge risk for fantasy purposes, but has pitched well when healthy. We're assuming he'll be available for the start of spring training. Read Past Outlooks
read more
RANKS
#