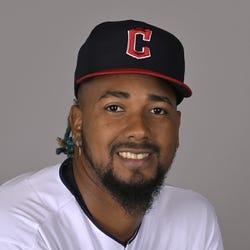 2022 Stats
W-L
3-4
ERA
1.36
WHIP
0.73
K
77
SV
42
2023 Projections
W-L
ERA
WHIP
K
SV
Unlock Our Projections
2023 Fantasy Outlook
His breakout 2021 season would be difficult to top, but Clase exceeded his already high expectations, leading the league with 42 saves while earning his first All-Star nomination and AL Reliever of the Month honors three times. Clase led all qualified relievers with a 0.73 WHIP, while also setting career best marks with 72.2 innings, 77 strikeouts, a 28.4% K% and an impressive 3.7% BB% that was among the best in the majors. His 82.4% team save share also led the league, as he had no competition to his role as the Guardians closer and maintained extremely high stability in that role all season. Clase's velocity was down a tick, averaging "only" 99.6 mph on his cutter after the pitch averaged triple digits last year. He still threw 196 pitches 100 mph or greater, but this was far less than the 471 he threw at that speed in 2021. Clase will be the first closer off the board in many 2023 drafts and is likely to be drafted among the top 3 closers at minimum. Read Past Outlooks
read more
RANKSFrom Preseason
#

* Exit Velocity, Barrels/BBE %, Balls Hit 95+ MPH %, and Spin Rate are benchmarked against 2019 data (min 30 IP). See here for more exit velocity/barrels stats plus an explanation of current limitations with that data set.
K/BB
7.70
K/9
9.5
BB/9
1.2
HR/9
0.4
Fastball
99.6 mph
ERA
1.36
WHIP
0.73
BABIP
.238
GB/FB
4.11
Left On Base
71.7%
Exit Velocity
80.9 mph
Barrels/BBE
1.5%
Spin Rate
2650 rpm
Balls Hit 95+ MPH
18.8%
Swinging Strike
17.1%
Prospect Rankings History
View Complete Emmanuel Clase Prospect Ranking History
Advanced Pitching Stats
Loading Advanced Pitching Stats...
Defensive Stats
Loading MLB Defensive Stats...
Stats Vs Today's Lineup
Want more matchup stats?
View Emmanuel Clase vs. Batter Stats
Loading Matchup Stats...
Guardians Depth Chart
Our full team depth charts are reserved for RotoWire subscribers.
Subscribe Now
Recent RotoWire Articles Featuring Emmanuel Clase
2023 Fantasy Baseball Rankings - Way Too Early Top 300 Draft Ranks
42 days ago
42 days ago
James Anderson provides a way too early top 300 rankings for those who have the itch to start drafting for 2023.
Closer Encounters: 2022 Saves in Review, Part 2
44 days ago
44 days ago
Ryan Rufe recaps the saves landscape in this year's NFBC Main Event and shares his own hits and misses from this past season.
Closer Encounters: 2022 Saves in Review, Part 1
50 days ago
50 days ago
Ryan Rufe recaps this past season's saves landscape. Just how many teams preferred closer committees over the conventional approach?
The Z Files: NFBC Holdem Rankings and Strategies
52 days ago
52 days ago
Todd Zola shares his gameplan and his rankings for NFBC Postseason Holdem contests.
MLB: Postseason Cheat Sheet and Strategy
56 days ago
56 days ago
Todd Zola tackles the MLB Postseason Cheat Sheet for RotoWire and discusses his approach to postseason leagues this year.
Past Fantasy Outlooks
2022
2021
2020
Imagine you're in the batter's box and the pitcher standing across from you casually fires 100-mph cutters in your direction. Now that you've woken up from that nightmare, take a moment to appreciate Clase's 2021 success. Nearly 45% of Clase's total pitches reached triple digits - 471 to be exact, while no other pitcher threw more than 215. Clase opened the year as Cleveland's primary closer and finished with 24 saves, a 61.5% share of his team's total saves. While he ceded 11 saves to James Karinchak, most were early in the season when Karinchak was in dominant form. Clase's 9.6 K/9 was not elite, but his 0.3 HR/9 was, ranking fourth among qualified relievers. He was lights-out in the second half with a 0.82 ERA, 0.61 WHIP and 33:2 K:BB over 33 innings after the All-Star break. Clase is likely to be drafted among the top 10 closers, but his upside fresh off of a breakout season could land him in the top five.
Clase had quite a bit of hype last offseason for a reliever with just 21 games and one save to his name. Those who hoped to see him surpass Brad Hand as closer wound up rather disappointed, as he tested positive for Boldenone, a performance-enhancing drug, leading to a year-long suspension. It was already shaping up to be a rocky season for the young righty, as a strained lat in late February would have seen him miss the first few months of the season under ordinary circumstances. We're now left with a player who has plenty of potential but who hasn't pitched in over a year and has recently battled an arm injury. That's a risky proposition, but the upside is still there and Hand is now out the door, opening up save chances. That keeps Clase firmly in lottery-ticket territory, though his 22.3 K% as a rookie and 23.7 K% in the minors mean he may not provide much value if he doesn't get saves.
Clase emerged early last season as one of the best relief-pitching prospects in baseball and got the call in August at the age of 21. He led the majors by a sizable margin in average cutter velocity at 99.2 mph. The 6-foot-2 righty also throws a high-spin, 99.5-mph four-seamer and a 90.5-mph slider, though he leaned on his 80-grade cutter 73.3% of the time. His 22.3 K% was underwhelming, given his stuff, but his 6.4 BB%, 60.6 GB% and 1.11 WHIP were very impressive marks for a high-velocity 21-year-old reliever. Clase has ninth-inning stuff -- he gave up just three homers in 68 innings last year -- so it's likely just a matter of when he gets the chance to move from setup man to closer. Clase headlined the December trade for Corey Kluber and his path to saves is a little more difficult in Cleveland, but the cream usually rises to the top in these situations.
More Fantasy News