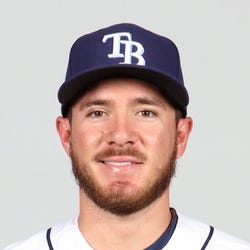 2022 Stats
AVG
.275
HR
0
RBI
3
R
3
SB
1
2023 Projections
AVG
HR
RBI
R
SB
Unlock Our Projections
2023 Fantasy Outlook
Quiroz is proof that it's better late than never as a baseball player, as he made his MLB debut in 2022 at the ripe old age of 30. He appeared in 14 games for the Cubs and tallied a .275/.370/.275 slash line across 40 at-bats. Quiroz didn't have any home runs, though he did record three runs, three RBI and a stolen base. The veteran had a productive career in Mexico before joining the Red Sox organization in 2017 and subsequently bouncing around the minors the past few seasons. He's unlikely to become an everyday option for the rebuilding Cubs, though the infielder could stick around as depth behind younger players such as Nick Madrigal and Nico Hoerner. Quiroz's debut was a nice story in 2022, but his fantasy outlook for 2023 isn't particularly inspiring. He'll likely begin the year in the minors and probably won't see enough playing time to make an impact. Read Past Outlooks
read more
League AAA
Bats L
Throws R
40 Man No
Height 5'6"
Weight 199
DOB 2/17/1992
Born Ciudad Obregon, Mexico
College None
Drafted 2017 BOS
$Signed a one-year contract with the Cubs in September of 2022.

* Exit Velocity and Barrels/PA % are benchmarked against 2019 data (min 400 PA) and Hard Hit Rate is benchmarked against last season's data (min 400 PA). See here for more exit velocity/barrels stats plus an explanation of current limitations with that data set.
BB/K
0.44
BB Rate
8.5%
K Rate
19.1%
BABIP
.355
ISO
.000
AVG
.275
OBP
.370
SLG
.275
OPS
.645
wOBA
.304
Exit Velocity
81.6 mph
Hard Hit Rate
18.8%
Barrels/PA
2.1%
Expected BA
.226
Expected SLG
.297
Sprint Speed
23.1 ft/sec
Ground Ball %
43.3%
Line Drive %
30.0%
Fly Ball %
26.7%
Prospect Rankings History
Advanced Batting Stats
Loading Advanced Batting Stats...
Additional Stats
Games By Position
Defensive Stats
Loading Games Played by Position...
Loading MLB Defensive Stats...
Batted Ball Stats
Loading Batted Ball Stats...
Stats Vs Upcoming Pitchers
Want more matchup stats?
View Esteban Quiroz vs. Pitcher Stats
Loading Matchup Stats...
Cubs Depth Chart
Our full team depth charts are reserved for RotoWire subscribers.
Subscribe Now
Recent RotoWire Articles Featuring Esteban Quiroz See More
MLB Barometer: Risers & Fallers
210 days ago
210 days ago
Erik Halterman offers his weekly list of players whose stock is rising or falling, including riser Brandon Woodruff, who returned from the IL with two dominant starts.
MLB: Hitting Prospect Tiers 2.0
354 days ago
354 days ago
James Anderson releases version 2.0 of his rookie hitter tiers for 2022, in which Rays outfielder Josh Lowe looks like a nice value at ADP.
Hitting Prospect Tiers for 2022
November 4, 2021
November 4, 2021
James Anderson puts 103 hitting prospects into tiers for 2022 value only, with Royals phenom Bobby Witt alone at the top.
Farm Futures: 178 AL East Prospects You Need To Know
February 23, 2021
February 23, 2021
James Anderson ranks the fantasy-relevant prospects in each AL East farm system including phenom Jasson Dominguez, who is the top Yankees prospect.
Farm Futures: Second Base Tiers
February 3, 2020
February 3, 2020
James Anderson breaks down his second base prospect tiers, featuring a couple big names at the top plus White Sox prospect Nick Madrigal, who could debut in April.
Past Fantasy Outlooks
2020
2019
Quiroz's emergence had a small part to play in the Padres shipping Luis Urias to the Brewers this offseason. He has been a star in Mexico and has shown well in affiliated ball since signing with the Red Sox in 2017 and subsequently getting traded to the Padres after impressing in the Arizona Fall League in 2018. While he is entering his age-28 season and has not yet made his big-league debut, his exploits in Mexico (at least 17% better than league average from 2014-2017) in his early-20s should not be overlooked. The 5-foot-7 second baseman controls a small strike zone (14.2 BB% at Triple-A) and logged a .299 ISO at Double-A and a .268 ISO at Triple-A. Since he is not yet on the 40-man roster, Jurickson Profar, Ty France, Greg Garcia and Jake Cronenworth may all be ahead of him on the depth chart for 2020, but things could change as the season progresses.
Quiroz joined the Red Sox prior to 2018 after spending the first seven seasons of his professional career in the Mexican League, where he hit a combined .293/.402/.451 across 437 games. The infielder was limited to just 24 games with Double-A Portland due to an abdominal strain that sidelined him for three and a half months, but he impressed when healthy, hitting .299/.413/.598 with seven homers and 24 RBI with the Sea Dogs. Quiroz, who is small at 5-foot-6, is known for his patience at the plate, which has led to OBPs north of .400 in each of the past three seasons. He strictly played second base in 2018 after playing all around the diamond during his time in Mexico. Now with the Padres following a November trade, Quiroz will likely begin his age-27 season back on the farm, though he could be an option for the big club at some point in 2019 if he continues to impress at the highest levels of the minors.
More Fantasy News