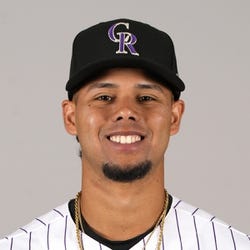 2022 Stats
AVG
.212
HR
1
RBI
2
R
2
SB
0
2023 Projections
AVG
HR
RBI
R
SB
Unlock Our Projections
2023 Fantasy Outlook
Tovar has only played nine games in the majors and five games at Triple-A, but the Rockies have been invested in him as their shortstop of the future since they bought him a house in 2020 when he couldn't return home to Venezuela during the pandemic. He had impressed at times in the minors prior to last season, most notably logging a 119 wRC+ as a 19-year-old at Single-A in 2021, but 2022 was certainly his breakout campaign. Tovar hit .318/.386/.545 with 13 home runs, 17 steals on 20 attempts and a 64:25 K:BB in 66 games as one of the youngest players at Double-A. Hip and groin injuries sidelined Tovar from late-June until mid-September, when he returned and went directly to Triple-A for a week before spending the final two weeks of the year with the big club. An over-aggressive approach has been the one offensive knock on Tovar, but so far he has mostly made it work. There's a chance he goes through a significant adjustment period against MLB pitching as a 21-year-old, but it seems pretty clear the Rockies will give him every opportunity in spring training to break camp as the starting shortstop. Tovar isn't a burner (57th percentile sprint speed) and doesn't hit the ball very hard (22.5 Hard% in the minors, 106 mph max EV in the majors), but he has been productive in games while being extremely young for most of his minor-league levels. Read Past Outlooks
read more
RANKSFrom Preseason
#

* Exit Velocity and Barrels/PA % are benchmarked against 2019 data (min 400 PA) and Hard Hit Rate is benchmarked against last season's data (min 400 PA). See here for more exit velocity/barrels stats plus an explanation of current limitations with that data set.
BB/K
0.22
BB Rate
5.7%
K Rate
25.7%
BABIP
.261
ISO
.121
AVG
.212
OBP
.257
SLG
.333
OPS
.590
wOBA
.263
Exit Velocity
88.6 mph
Hard Hit Rate
23.1%
Barrels/PA
8.6%
Expected BA
.249
Expected SLG
.390
Sprint Speed
24.4 ft/sec
Ground Ball %
50.0%
Line Drive %
16.7%
Fly Ball %
33.3%
Prospect Rankings History
Advanced Batting Stats
Loading Advanced Batting Stats...
Additional Stats
Games By Position
Defensive Stats
Loading Games Played by Position...
Loading MLB Defensive Stats...
Batted Ball Stats
Loading Batted Ball Stats...
Stats Vs Upcoming Pitchers
Want more matchup stats?
View Ezequiel Tovar vs. Pitcher Stats
Loading Matchup Stats...
Rockies Depth Chart
Our full team depth charts are reserved for RotoWire subscribers.
Subscribe Now
Recent RotoWire Articles Featuring Ezequiel Tovar
2023 Fantasy Baseball Rankings - Way Too Early Top 300 Draft Ranks
46 days ago
46 days ago
James Anderson provides a way too early top 300 rankings for those who have the itch to start drafting for 2023.
NL FAAB Factor: Waiver Pickups of the Week
71 days ago
71 days ago
Pitching remains Jan Levine's focus for the final week of September.
FanDuel MLB: Friday Targets
73 days ago
73 days ago
Chris Bennett suggests that Mookie Betts is a must-play at his salary Friday as part of a 12-game FanDuel slate.
MLB FAAB Factor: Waiver Pickups of the Week
74 days ago
74 days ago
Jason Shebilske offers his top waiver pickups of the week, including Domingo Acevedo, who should serve as Oakland's closer down the stretch.
NL FAAB Factor: Waiver Pickups of the Week
78 days ago
78 days ago
The regular season is winding down and Jan Levine is here with a few players who could provide a late fantasy boost.
2022 Fantasy Outlook
The Rockies have pushed Tovar aggressively at every turn, culminating with his big-league debut in September. He is the team's shortstop of the present and future after a breakout campaign in which he hit .316/.387/.540 with 14 home runs and 17 steals in 71 games between Double-A and Triple-A. Tovar turned 21 in August, so while there may be growing pains initially in the majors, he could still be improving as a hitter.
More Fantasy News