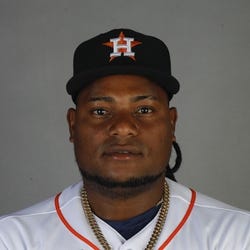 2022 Stats
W-L
17-6
ERA
2.82
WHIP
1.16
K
194
SV
0
2023 Projections
W-L
ERA
WHIP
K
SV
Unlock Our Projections
2023 Fantasy Outlook
Valdez was one of just eight hurlers to log at least 200 innings as his 201.1 frames was the fifth most in MLB. He fell six strikeouts short of 200, but as an extreme groundball pitcher, Valdez is more concerned about minimizing barrels which he did, landing in the 75th percentile. Valdez threw his sinker half the time, followed by a 90th percentile spin rate curve. He introduced a cutter (which some classified as a slider), throwing it 10% of the time with a solid 18% swinging strike rate. Further refinement of Valdez's repertoire could improve his 23.5% strikeout rate, but he's likely more focused on improving on last season's 8.1% walk rate. Valdez doesn't fan ample batters to be a fantasy ace, but his volume of innings keeps the raw total sufficient for the next tier. Valdez is a bit of a WHIP risk as grounders often inflate BABIP, but they also limit homers, hence keeping ERA in check. Read Past Outlooks
read more
RANKSFrom Preseason
#

* Exit Velocity, Barrels/BBE %, Balls Hit 95+ MPH %, and Spin Rate are benchmarked against 2019 data (min 120 IP). See here for more exit velocity/barrels stats plus an explanation of current limitations with that data set.
K/BB
2.90
K/9
8.7
BB/9
3.0
HR/9
0.5
Fastball
94.0 mph
ERA
2.82
WHIP
1.16
BABIP
.293
GB/FB
5.21
Left On Base
74.4%
Exit Velocity
83.8 mph
Barrels/BBE
3.7%
Spin Rate
2325 rpm
Balls Hit 95+ MPH
28.4%
Swinging Strike
11.3%
Advanced Pitching Stats
Loading Advanced Pitching Stats...
Defensive Stats
Loading MLB Defensive Stats...
Stats Vs Today's Lineup
Want more matchup stats?
View Framber Valdez vs. Batter Stats
Loading Matchup Stats...
Astros Depth Chart
Our full team depth charts are reserved for RotoWire subscribers.
Subscribe Now
Recent RotoWire Articles Featuring Framber Valdez
MLB World Series Game 6 Picks: MLB Best Bets for Saturday, November 5
32 days ago
32 days ago
Juan Carlos Blanco offers his favorite bets for Game 6 of the World Series.
FanDuel MLB: Saturday World Series Game 6 Targets
32 days ago
32 days ago
Chris Bennett tackles picks for Game 6 of the World Series and suggests Rhys Hoskins against lefty Framber Valdez.
DraftKings MLB: Saturday Breakdown
32 days ago
32 days ago
There's one team Dan Marcus definitely prefers for Game 6. Read on to see if you can figure it out.
Yahoo DFS Baseball: Saturday Picks
32 days ago
32 days ago
Chris Morgan analyzes the options for Game 6 of the World Series.
MLB DFS Picks: FanDuel Strategy for World Series Game 2
39 days ago
39 days ago
Chris Bennett advocates for paying up for Yordan Alvarez to lead your FanDuel lineups for Game 2 of the World Series.
Past Fantasy Outlooks
2022
2021
2020
2019
Valdez overcame a finger injury that delayed his season debut, but he produced familiar results once he found his rhythm. He induced a 70.3% groundball rate, which helped him limit his home run rate to 0.8 HR/9. He'll need to maintain that carrying skill, as his 26.4 K% in 2020 predictably regressed due to a static swinging strike rate of 10.2% with a resulting 21.9 K%. While a contact-heavy approach carries plenty of risk, it did help Valdez work deep into games as he completed at least seven innings in eight of his 22 starts - a standout trait in the modern game. Moving forward, there isn't much room to expect Valdez to improve upon his 3.14 ERA in 2021, and instead it appears much more likely that mark regresses. Even so, his skillset should allow him to rack up plenty of volume and his strong team context should put him in the position to rack up wins.
Valdez stepped up in a huge way in the absences of Justin Verlander and Jose Urquidy, ascending to previously unforeseen new heights. Valdez was stellar over his 11 regular-season appearances (10 starts) with a 2.85 FIP over 70.2 innings, and continued to shine throughout the postseason, even earning the Game 1 nod over Zack Greinke in the ALCS. The lefty had a 1.88 ERA and 26:10 K:BB over 24 playoff innings. Don't kick yourself if you did not see this breakout coming. Valdez showed flashes in 2018 but had an ugly 13.4 BB% in 2019 before suddenly finding his control and shaving his walk rate to just 5.6% while adding nearly six percentage points to his strikeout rate. With his heavy sinker-curveball approach, Valdez does a good job keeping the ball on the ground (career 62.8 GB%), but he had a very favorable schedule last season and it's fair to wonder how much of the control gains he might give back.
The young left-hander found success with the Astros in 2018 -- mostly working as a spot starter -- with a 2.19 ERA and 1.24 WHIP over 37 innings, and he carried that performance through his first 16 outings in 2019. But Valdez had a 9.66 ERA across his final 31.2 innings and wasn't selected for the playoff roster as a result. The 26-year-old's major issue has always been walks, and his 13.8 BB% last season remains a concern. He looked much more comfortable at Triple-A with a 69:17 K:BB over 44.1 frames, but he was unable to carry that success into the majors. Valdez's hard sinker helped produce a 62.1% groundball rate, but the 25.7 HR/FB% illustrates his general inconsistency. He split time between the rotation and bullpen in 2019, but he seems more likely to benefit the Astros in relief this season given the more reliable starting options on the team.
Despite having made just two appearances above Double-A, Valdez was summoned to the big leagues in late August and went on to make five starts and three relief appearances for the Astros, finishing with an excellent 2.19 ERA. Although the results were impressive, there are reasons to be skeptical. He was never viewed as a particularly interesting prospect and was thought to be ticketed for a bullpen role, which still seems likely as he threw his third pitch (a changeup) just 1.7% of the time. He walked far too many batters (15.6%) -- another sign of a potential bullpen future -- which contributed to a forgettable 4.65 FIP. An excellent 70.3% groundball rate makes the lefty somewhat interesting, but he's far from a lock as a future starter and would certainly have far less fantasy appeal if he ends up in a long-relief role.
More Fantasy News