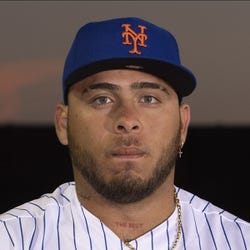 Out
Injury Ankle
Est. Return 2/1/2023
2022 Stats
AVG
.167
HR
1
RBI
1
R
3
SB
0
2023 Projections
AVG
HR
RBI
R
SB
Unlock Our Projections
2023 Fantasy Outlook
Generally considered a top-10 real-life prospect - although more divisive on fantasy rankings - Alvarez is best known for his impressive age-to-level advancement through the minors and huge raw power. He got his first MLB cup of coffee as a 20-year-old after slashing .260/.374/.510 with a 24.8 K%, 14.1 BB% and 36.3 Hard% across Double-A and Triple-A. Alvarez, who turned 21 in November, is well ahead of the typical catcher his age on the developmental path. He is also an oddity from a physical standpoint, as he is generously listed at 5-foot-10 and a similarly favorable 233 pounds. We've seen boxy catchers have success, but there's no denying he is a 20-grade athlete who figures to get even less agile over the coming years. His hard-hit data and in-game performance suggest he could hit double-digit homers as a rookie, but it seems like a neutral batting average would be a best-case scenario. He will always be more valuable in OBP leagues. Alvarez underwent ankle surgery in October but is expected to be ready to compete for the starting catcher job in spring training. Read Past Outlooks
read more
RANKSFrom Preseason
#

* Exit Velocity and Barrels/PA % are benchmarked against 2019 data (min 400 PA) and Hard Hit Rate is benchmarked against last season's data (min 400 PA). See here for more exit velocity/barrels stats plus an explanation of current limitations with that data set.
BB/K
0.50
BB Rate
14.3%
K Rate
28.6%
BABIP
.143
ISO
.333
AVG
.167
OBP
.286
SLG
.500
OPS
.786
wOBA
.339
Exit Velocity
89.1 mph
Hard Hit Rate
50.0%
Barrels/PA
21.4%
Expected BA
.252
Expected SLG
.654
Sprint Speed
23.7 ft/sec
Ground Ball %
50.0%
Line Drive %
12.5%
Fly Ball %
37.5%
Prospect Rankings History
Advanced Batting Stats
Loading Advanced Batting Stats...
Additional Stats
Games By Position
Defensive Stats
Loading Games Played by Position...
Loading MLB Defensive Stats...
Batted Ball Stats
Loading Batted Ball Stats...
Stats Vs Upcoming Pitchers
Want more matchup stats?
View Francisco Alvarez vs. Pitcher Stats
Loading Matchup Stats...
Mets Depth Chart
Our full team depth charts are reserved for RotoWire subscribers.
Subscribe Now
Recent RotoWire Articles Featuring Francisco Alvarez
NL FAAB Factor: Waiver Pickups of the Week
60 days ago
60 days ago
Jan Levine concludes his column for the season with a look at the remaining schedule while also offering potential stash candidates.
The Catcher Renaissance
63 days ago
63 days ago
James Anderson details the boom in quality offensive catchers for dynasty leagues and redraft leagues and the supply and demand issues that will spawn from this catcher renaissance.
MLB Hitting Prospect Draft For 2023
85 days ago
85 days ago
James Anderson conducted a draft of hitting prospects for 2023 redraft value only, in which he landed Vaughn Grissom with the No. 4 overall pick.
Minor League Barometer: Risers & Fallers
93 days ago
93 days ago
Jesse Siegel checks out which up-and-comers could get promoted and who may have to wait until 2023.
NL FAAB Factor: Waiver Pickups of the Week
123 days ago
123 days ago
With only a couple days before the trade deadline, Jan Levine checks out a few NLers who could benefit from upcoming transactions.
Past Fantasy Outlooks
2022
2021
2020
Alvarez quickly showed that he was too advanced for an age-appropriate assignment to Low-A, hitting .417 with two home runs, five doubles, 15 walks and seven strikeouts in 15 games before getting a bump to High-A, where he was the only qualified 19-year-old hitter. His production there was still excellent, albeit less outrageous. He hit .247/.351/.538 with 22 home runs, a 12.0 BB% and a 24.6 K% in 84 games. Given how stocky and slow he is, it's not surprising that his 49.8 Pull% and 45.2 GB% resulted in a .260 BABIP. It's unrealistic to expect Alvarez to be much better than a neutral fantasy contributor in batting average, but that's still a strong outcome for a primary catcher with at least plus power. His defense behind the plate isn't amazing, but he will stick at the position. Given how quickly he has moved up the ladder and how productive he has been, Alvarez is one of the few catching prospects with a realistic chance to be a top-five fantasy option at the position. He will reach the majors in 2023 or 2024.
Alvarez was the youngest player at the Mets' alternate training site and received rave reviews for his work on both sides of the ball. At 5-foot-11, 220 pounds, he is physically mature and his strength shows up in the form of plus all-fields power and a plus arm. His hit tool and approach are pretty advanced, but he will probably be power over hit in the majors. He was so good offensively in 2019 as a 17-year-old that some outside the organization speculated that he might be moved off catcher to fast-track his bat to the majors, but the Mets are keeping him behind the dish, which means he will need a couple more years in the minors to master the position. Evaluating catchers for dynasty leagues, especially ones who are multiple years away from contributing, is always a challenge, but he clearly has the upside to be a top-five fantasy catcher for a decade.
This offseason's catching prospect du jour, Alvarez was aggressively assigned to the Gulf Coast League as a 17-year-old, but that lasted just seven games (281 wRC+) before he needed to be given an even more ludicrous assignment. Six months younger than the next youngest hitter in the Appalachian League, Alvarez still managed to thrive, logging a 129 wRC+, 11.3 BB% and 21.9 K% while using the whole field (35.7 Oppo%) and lifting the ball with ease (38.1 GB%). The fact that he is a catching prospect is what makes this insane, as catchers typically lag a couple years behind other position players on their march to the big leagues, due to the time and effort needed to become a capable defender. Alvarez can improve his framing, but nobody questions his ability to stick behind the plate. He could be a 60- or 70-grade hitter with plus power and good on-base skills, and his bat should keep him on a fast track.
More Fantasy News