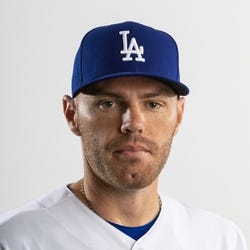 2022 Stats
AVG
.325
HR
21
RBI
100
R
117
SB
13
2023 Projections
AVG
HR
RBI
R
SB
Unlock Our Projections
2023 Fantasy Outlook
With a 157 wRC+, Freeman was at least 50 percent better than average for the fifth time in his career. His homers fell, but a personal best 47 doubles helped mitigate the drop. One home run estimator indicated three of his 22 dingers were undeserved while another pegged him for four more. The underlying metrics show no difference from previous seasons, so perhaps the drop was moving to the NL West, though on paper it shouldn't have made a difference. Freeman swiped 13 bases, his most ever. Freeman only missed three games, bringing the count to just 10 absences since playing only 117 games in 2017. Excluding 2020, Freeman has collected at least 192 runs plus RBI over this span, exceeding 200 for the last three full campaigns. Freeman may not match the homers and steals of other elite hitters, but he makes up for it in the other three roto categories, and with a 12 percent walk rate, he's an OBP and points league monster. Read Past Outlooks
read more
RANKS
#12
ADP
#