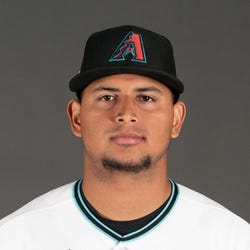 2022 Stats
AVG
.319
HR
1
RBI
7
R
10
SB
0
2023 Projections
AVG
HR
RBI
R
SB
Unlock Our Projections
2023 Fantasy Outlook
Not since Cristian Pache have we seen this big of a gulf between a player's ranking on real-life prospect lists and fantasy prospect lists. That's not to say Moreno will become fantasy irrelevant like Pache, but so much of his perceived real-life value is tied to his defense behind the plate. His hit tool is excellent, especially relative to other catching prospects, but Moreno has hit just 11 home runs in 99 minor-league games since the start of 2021 and his 24.9 Hard% in the minors last season is a middling mark. He did well in his first big-league stint as a 22-year-old, hitting .319 with a .274 xBA and 11.0 K% in 25 games, but he had just two extra-base hits. Prime Jonathan Lucroy - something like a .290 AVG and 15-to-20 HR - seems like a median outcome for his prime years and prime Buster Posey - say a .310 AVG and 20-to-25 HR - is a best-case scenario. Either one of those outcomes would be great for fantasy, but we've also got to assess the path to playing time in the immediate future. We should expect the Blue Jays to trade one of their three catchers this offseason, but the situation will remain murky until that trade happens. Read Past Outlooks
read more
RANKS
#

* Exit Velocity and Barrels/PA % are benchmarked against 2019 data (min 400 PA) and Hard Hit Rate is benchmarked against last season's data (min 400 PA). See here for more exit velocity/barrels stats plus an explanation of current limitations with that data set.
BB/K
0.50
BB Rate
5.5%
K Rate
11.0%
BABIP
.350
ISO
.058
AVG
.319
OBP
.356
SLG
.377
OPS
.733
wOBA
.328
Exit Velocity
89.2 mph
Hard Hit Rate
21.3%
Barrels/PA
2.7%
Expected BA
.274
Expected SLG
.362
Sprint Speed
24.0 ft/sec
Ground Ball %
57.4%
Line Drive %
18.0%
Fly Ball %
24.6%
Prospect Rankings History
Advanced Batting Stats
Loading Advanced Batting Stats...
Additional Stats
Games By Position
Defensive Stats
Loading Games Played by Position...
Loading MLB Defensive Stats...
Batted Ball Stats
Loading Batted Ball Stats...
Stats Vs Upcoming Pitchers
Want more matchup stats?
View Gabriel Moreno vs. Pitcher Stats
Loading Matchup Stats...
Blue Jays Depth Chart
Our full team depth charts are reserved for RotoWire subscribers.
Subscribe Now
Recent RotoWire Articles Featuring Gabriel Moreno
Collette Calls: Hitting Bold Predictions Reviews
58 days ago
58 days ago
Jason Collette looks back at his bold predictions from last offseason, examining what went right and what went wrong.
The Catcher Renaissance
71 days ago
71 days ago
James Anderson details the boom in quality offensive catchers for dynasty leagues and redraft leagues and the supply and demand issues that will spawn from this catcher renaissance.
MLB Barometer: 2022 All-Risers Team
73 days ago
73 days ago
Erik Halterman lists this season's All-Risers, featuring Aaron Judge, who's the first player to reach 60 homers in 21 years.
AL FAAB Factor: Waiver Pickups of the Week
89 days ago
89 days ago
Erik Siegrist takes a look at the AL free-agent pool as Kerry Carpenter heats up for the Tigers.
MLB Hitting Prospect Draft For 2023
93 days ago
93 days ago
James Anderson conducted a draft of hitting prospects for 2023 redraft value only, in which he landed Vaughn Grissom with the No. 4 overall pick.
2022 Fantasy Outlook
Moreno was one of the top breakout prospects in the minors in 2021, even with a broken thumb limiting him to half a season. He had been internally labeled the team's catcher of the future entering the year, but even those highest on Moreno didn't expect him to hit .373/.441/.651 (192 wRC+) with eight home runs, a 9.7 BB% and a 15.2 K% in 32 games as a 21-year-old catcher at Double-A. He got bumped up to Triple-A for three games after returning from the thumb injury in September and then went to the Arizona Fall League, where he hit .329/.410/.494 with a 13:13 K:BB in 100 PA. It's Moreno's special skill with the bat that will make him a big piece of Toronto's future, not necessarily his work behind the plate, although he is good enough to stick there. However, third base is currently a bigger hole for the Jays, and he started there twice in the AFL, leading to speculation that the hot corner may be his long-term home. His big-league ETA and short-term playing time outlook are difficult to peg, but it's possible he is up in the first few months. Moreno has an excellent command of the strike zone for a player his age, and he has the bat speed to hit 20-plus home runs with one of the best batting averages among catcher-eligible players.
More Fantasy News