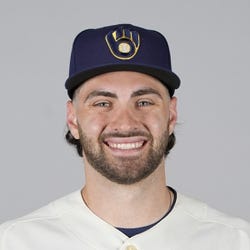 2022 Stats
AVG
.311
HR
2
RBI
9
R
9
SB
8
2023 Projections
AVG
HR
RBI
R
SB
Unlock Our Projections
2023 Fantasy Outlook
It was a tale of three seasons for Mitchell. The 6-foot-3 center fielder was dreadful for his first 29 games at Double-A, logging a .676 OPS and 32.3 K% before suffering an oblique injury. He returned in mid-July and tallied a .356/.419/.515 slash line with three home runs, 10 steals and a 20.3 K% in 34 games between Double-A and Triple-A. The big difference seemed to be that Mitchell reverted to his approach from UCLA, where he was working more as a table setter than someone who was regularly looking to put his plus raw power to use in games. Milwaukee diverted from their attempts to unlock that power in games and just let him be the most effective version of himself. That approach earned him a late-season call-up. In the majors, Mitchell's 41.2 K% and .548 BABIP scream regression, but he nonetheless managed to be worth a full win above replacement while hitting .311 with two home runs and eight steals in 28 games. The Brewers have a crowded outfield depth chart, specifically on the prospect side, with Esteury Ruiz and Sal Frelick also profiling as speedy big-league-ready center fielders. Mitchell is the eldest and got the most run in the majors of the trio, so he will likely be given a shot to win a job in camp. Read Past Outlooks
read more
RANKSFrom Preseason
#

* Exit Velocity and Barrels/PA % are benchmarked against 2019 data (min 400 PA) and Hard Hit Rate is benchmarked against last season's data (min 400 PA). See here for more exit velocity/barrels stats plus an explanation of current limitations with that data set.
BB/K
0.21
BB Rate
8.8%
K Rate
41.2%
BABIP
.548
ISO
.148
AVG
.311
OBP
.373
SLG
.459
OPS
.832
wOBA
.367
Exit Velocity
92.9 mph
Hard Hit Rate
44.1%
Barrels/PA
5.9%
Expected BA
.187
Expected SLG
.339
Sprint Speed
26.3 ft/sec
Ground Ball %
39.4%
Line Drive %
21.2%
Fly Ball %
39.4%
Prospect Rankings History
Advanced Batting Stats
Loading Advanced Batting Stats...
Additional Stats
Games By Position
Defensive Stats
Loading Games Played by Position...
Loading MLB Defensive Stats...
Batted Ball Stats
Loading Batted Ball Stats...
Stats Vs Upcoming Pitchers
Want more matchup stats?
View Garrett Mitchell vs. Pitcher Stats
Loading Matchup Stats...
Brewers Depth Chart
Our full team depth charts are reserved for RotoWire subscribers.
Subscribe Now
Recent RotoWire Articles Featuring Garrett Mitchell
MLB Dynasty Rankings + 10 Rookies for 2023
14 days ago
14 days ago
James Anderson links to his fresh update to the dynasty rankings and profiles 10 rookies he is targeting for 2023, including top prospect Corbin Carroll.
MLB Hitting Prospect Draft For 2023
91 days ago
91 days ago
James Anderson conducted a draft of hitting prospects for 2023 redraft value only, in which he landed Vaughn Grissom with the No. 4 overall pick.
NL FAAB Factor: Waiver Pickups of the Week
101 days ago
101 days ago
Jan Levine packs this week's edition with a number of pitchers who may be set to receive more opportunities.
MLB: Prospect Mailbag 5/26/22
195 days ago
195 days ago
James Anderson answers questions regarding this week's update to the top 400 prospect rankings, in which Twins shortstop Royce Lewis slots in at No. 2 overall.
MLB: Notable Assignments for NL Prospects
236 days ago
236 days ago
James Anderson breaks down every notable assignment for National League prospects, including Bryce Elder's ascent to Atlanta's rotation.
2021 Fantasy Outlook
Mitchell brings a dazzling array of tools to the table, but his ability to leverage them consistently in games is in question. He slid to the Brewers with the No. 20 overall pick in last year's draft, in part due to him having Type 1 diabetes. The UCLA product logged an elite 12.0 K% and a 9.0 BB% in 366 PA over his sophomore and junior campaigns. While he hit around .350 in each of those seasons, Mitchell had just six home runs in 77 games, despite showing off plus raw power in batting practice. He can ambush mistakes over the plate, but he typically brings a contact-oriented approach to the dish. The Brewers will likely attempt to unlock more power, and a swing change would delay his arrival in the majors. For now, 70-grade speed is the top selling point in dynasty. A quad injury limited his reps in the fall instructional league, so he could be pretty rusty when he reports to spring training.
More Fantasy News