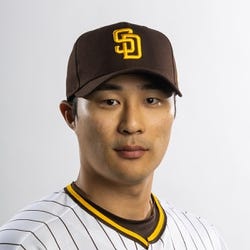 2022 Stats
AVG
.251
HR
11
RBI
59
R
58
SB
12
2023 Projections
AVG
HR
RBI
R
SB
Unlock Our Projections
2023 Fantasy Outlook
After looking overmatched the previous season, Kim settled in as the Padres regular shortstop, posting a 105 wRC+ while playing excellent defense. His biggest strides came against curveballs and sliders. In his rookie season, Kim fanned at a 35% clip against breaking pitches, but last season he lowered it to 17%. Kim fanned at a 19% rate both years facing fastballs. He doesn't hit the ball hard, but Kim puts it in play with a pull approach allowing him to take advantage of the shorter distances down the left field line in Petco Park. Kim was successful on 12 of 14 stolen base attempts. He's a candidate to run more as he further acclimated to MLB pitching. It's unclear where Kim will play, as the Padres have some moving parts, including the return of Fernando Tatis, who may move off shortstop. If Kim is a regular, he's mixed-league worthy, but be ready if he doesn't play as much as last season. Read Past Outlooks
read more
RANKS
#261
ADP
#

* Exit Velocity and Barrels/PA % are benchmarked against 2019 data (min 400 PA) and Hard Hit Rate is benchmarked against last season's data (min 400 PA). See here for more exit velocity/barrels stats plus an explanation of current limitations with that data set.
BB/K
0.51
BB Rate
8.8%
K Rate
17.2%
BABIP
.290
ISO
.132
AVG
.251
OBP
.325
SLG
.383
OPS
.708
wOBA
.315
Exit Velocity
86.7 mph
Hard Hit Rate
27.8%
Barrels/PA
3.1%
Expected BA
.250
Expected SLG
.368
Sprint Speed
24.8 ft/sec
Ground Ball %
39.5%
Line Drive %
21.2%
Fly Ball %
39.3%
Advanced Batting Stats
Loading Advanced Batting Stats...
Additional Stats
Games By Position
Defensive Stats
Loading Games Played by Position...
Loading MLB Defensive Stats...
Batted Ball Stats
Loading Batted Ball Stats...
Stats Vs Upcoming Pitchers
Want more matchup stats?
View Ha-Seong Kim vs. Pitcher Stats
Loading Matchup Stats...
Padres Depth Chart
Our full team depth charts are reserved for RotoWire subscribers.
Subscribe Now
Recent RotoWire Articles Featuring Ha-Seong Kim See More
MLB Roundtable Rankings: 2023 Fantasy Baseball Top 300
Yesterday
Yesterday
From Trea Turner to Spencer Torkelson, RotoWire's Roundtable Rankings crew offers their combined top 300 fantasy baseball rankings.
FanDuel MLB: Saturday Targets
103 days ago
103 days ago
Chris Bennett is recommending Cristian Javier at a discount against the Yankees Saturday.
FanDuel MLB: Friday Targets
104 days ago
104 days ago
Chris Bennett breaks down Game 3 of the NLCS between the Padres and Phillies on Friday.
DraftKings MLB: Friday Breakdown
104 days ago
104 days ago
Chris Morgan offers his picks for Friday’s Padres-Phillies game in which Ha-Seong Kim should hit well against Ranger Suarez.
2023 Fantasy Baseball Rankings - Way Too Early Top 300 Draft Ranks
105 days ago
105 days ago
James Anderson provides a way too early top 300 rankings for those who have the itch to start drafting for 2023.
Past Fantasy Outlooks
2022
2021
After a career of impressive numbers in the KBO, Kim struggled to adjust to the quality of major-league pitching as he hit .160 off non-fastballs and just .230 off the hard stuff. Breaking balls were particularly troublesome for him as he saw them 30% of the time and hit .159/.178/.341 off that pitch classification. His defensive prowess was his saving grace last season. Kim showed the ability to play three positions and was even 6-for-7 in his steal attempts when he did manage to reach base. He is a bottom-of-the-order hitter in his current form, and it will be interesting to see how he and the league adjust to pitchers no longer hitting as Kim was particularly bad hitting in front of pitchers last season (.177/.241/.317). Whereas his value was inflated last season, he is more properly priced in drafts this season.
Kim is something of a rarity as a player coming over from Asia in his mid-20s. The 25-year-old was a star in the KBO, hitting .281 or better in six straight seasons while averaging 26 homers and 26 steals. This past year was his best yet, as he hit a career-high 30 HR while slashing .306/.397/.523 and stealing 23 bases. He also demonstrated excellent control of the strike zone, walking more than he struck out. Showing such a well-rounded skill set while primarily playing shortstop indicates he's definitely ready to make the jump, though there are questions that come with the step up in competition. He's likely a fringy defender at best at shortstop at the MLB level, and he won't be asked to play that position much after signing with the Padres. Kim should close to play every day between second, third and the outfield, and the major-league equivalencies paint him as a solid cross-category asset.
More Fantasy News