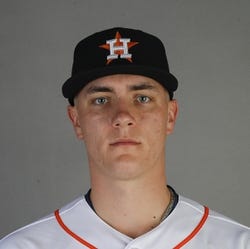 2022 Stats
W-L
2-0
ERA
0.89
WHIP
1.08
K
22
SV
0
2023 Projections
W-L
ERA
WHIP
K
SV
Unlock Our Projections
2023 Fantasy Outlook
Armed with an upper-90s fastball, low-80s curveball with above-average drop and a 93-mph slider, Brown has the type of modern pitch mix that passes the eye test and excites data analysts. For years, prospect analysts knew of Brown's impressive repertoire, but it wasn't until late in 2021 that he started to throw strikes at a rate that suggested he could make it as a starter. His walk rate at Triple-A and the majors has been between 8.8% and 10.6%, which is still on the high end for a starter, but it's workable and at 24 years old, there's still room for improvement. In addition to missing bats at an above-average clip, Brown has typically logged elite groundball rates north of 50%. There would be much more redraft buzz if the Astros didn't have perhaps the deepest rotation in the game. As such, it's unclear how many starts he will make in 2023, but there is a very high long-term ceiling. Read Past Outlooks
read more
RANKSFrom Preseason
#