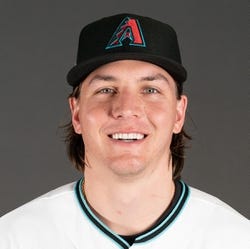 2022 Stats
AVG
.283
HR
8
RBI
43
R
53
SB
23
2023 Projections
AVG
HR
RBI
R
SB
Unlock Our Projections
2023 Fantasy Outlook
McCarthy began the 2023 season on the big-league roster as a reserve and was up and down a couple times before ultimately settling into a regular role in the second half. A supplemental first-round pick by Arizona in 2018, McCarthy showed a great deal of improvement with his bat-to-ball skills during his time at Triple-A last season and those improvements carried over, fueling his .300/.360/..426 line after the break. Best of all for fantasy players, McCarthy racked up 23 steals in total across 99 games (354 plate appearances) while only getting caught stealing three times. His sprint speed ranked in the 98th percentile, though the Statcast numbers throw cold water on his plate production. Regardless the Diamondbacks will want to see what they have in McCarthy, who should continue to have the green light given his success rate. The 25-year-old showed that he can hold his own against lefty pitching (.764 OPS). Read Past Outlooks
read more
RANKSFrom Preseason
#

* Exit Velocity and Barrels/PA % are benchmarked against 2019 data (min 400 PA) and Hard Hit Rate is benchmarked against last season's data (min 400 PA). See here for more exit velocity/barrels stats plus an explanation of current limitations with that data set.
BB/K
0.30
BB Rate
6.5%
K Rate
21.5%
BABIP
.349
ISO
.143
AVG
.283
OBP
.342
SLG
.427
OPS
.769
wOBA
.339
Exit Velocity
87.4 mph
Hard Hit Rate
26.5%
Barrels/PA
3.4%
Expected BA
.249
Expected SLG
.357
Sprint Speed
26.1 ft/sec
Ground Ball %
49.2%
Line Drive %
22.3%
Fly Ball %
28.6%
Prospect Rankings History
View Complete Jake McCarthy Prospect Ranking History
Advanced Batting Stats
Loading Advanced Batting Stats...
Additional Stats
Games By Position
Defensive Stats
Loading Games Played by Position...
Loading MLB Defensive Stats...
Batted Ball Stats
Loading Batted Ball Stats...
Stats Vs Upcoming Pitchers
Want more matchup stats?
View Jake McCarthy vs. Pitcher Stats
Loading Matchup Stats...
Diamondbacks Depth Chart
Our full team depth charts are reserved for RotoWire subscribers.
Subscribe Now
Recent RotoWire Articles Featuring Jake McCarthy
2023 Fantasy Baseball Rankings - Way Too Early Top 300 Draft Ranks
46 days ago
46 days ago
James Anderson provides a way too early top 300 rankings for those who have the itch to start drafting for 2023.
Collette Calls: Buckle Up
59 days ago
59 days ago
Jason Collette is excited for the increase in steals which the new rules should bring next season. Which hitters and pitchers will be affected the most?
Sorare: Dabbling in the Market
69 days ago
69 days ago
Todd Zola continues to dabble with Sorare, searching for players whose value could jump.
Todd's Takes: Passing Judgment
74 days ago
74 days ago
Todd Zola discusses the AL MVP race and shares his biggest fantasy takeaways from Wednesday's MLB action.
NFBC Main Event: Fever Dream, Chapter 4
84 days ago
84 days ago
Ryan Rufe goes over the moves he made and the lessons he learned while managing his NFBC Main Event team over the last two months.
2019 Fantasy Outlook
The younger brother of Joe McCarthy, an OF/1B prospect in the upper levels of the Rays' system, Jake entered the year with a chance to go in the middle of the first round, but a broken wrist cost him most of his junior year at Virginia. He didn't fall far in the draft, going in the competitive balance round (39th overall) and netting a $1.65 million bonus. McCarthy spent most of his debut season in the Northwest League, where his 0.55 BB/K ranked eighth and his 132 wRC+ ranked 12th. He put his plus speed to work, stealing 20 bases on 28 attempts. McCarthy will stick in center field and may have a good enough approach to eventually hit atop a lineup. The recent history of high-pedigree Virginia hitters in pro ball isn't great, but McCarthy has better raw tools than most of those examples. He is not expected to hit for a ton of power (53.0 GB%), but at 6-foot-3, 195 pounds, he could unlock 15-to-20 homer pop with more professional instruction.
More Fantasy News