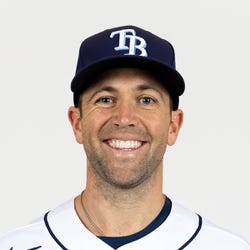 2022 Stats
W-L
2-3
ERA
1.56
WHIP
0.76
K
75
SV
8
2023 Projections
W-L
ERA
WHIP
K
SV
Unlock Our Projections
2023 Fantasy Outlook
Adam played for three different teams in four seasons prior to joining the Rays in 2022. The journeyman was impressive from the outset, parlaying a strong string into a bullpen role out of camp. The 31-year-old delivered a career-high 63.1 innings and established career marks across multiple categories, including a team-leading eight saves and a 0.76 WHIP that was third-best among qualified relievers. His 7.2% walk rate and 45.7% groundball rate were notably better than his career averages and he was one of the best pitchers in the league at limiting hard contact. Adam threw fewer fastballs (32% pitch usage) and ditched his curveball almost entirely last season in favor of more sliders (35%) and changeups (33%). All three pitches generated a 34% or higher whiff rate and his 75.8% in-zone contact percentage was eighth-best among relief pitchers. Expect some ERA regression, but Adam should maintain his high leverage role for the Rays. Read Past Outlooks
read more
League Majors
Bats R
Throws R
40 Man Yes
Height 6'3"
Weight 229
DOB 8/4/1991
Born Omaha, NE
College None
Drafted 5th Rd 2010 KC
$Signed a one-year, $900,000 contract with the Rays in March of 2022.

* Exit Velocity, Barrels/BBE %, Balls Hit 95+ MPH %, and Spin Rate are benchmarked against 2019 data (min 30 IP). See here for more exit velocity/barrels stats plus an explanation of current limitations with that data set.
K/BB
4.41
K/9
10.7
BB/9
2.4
HR/9
0.7
Fastball
94.9 mph
ERA
1.56
WHIP
0.76
BABIP
.201
GB/FB
1.20
Left On Base
87.8%
Exit Velocity
79.4 mph
Barrels/BBE
3.7%
Spin Rate
2435 rpm
Balls Hit 95+ MPH
18.5%
Swinging Strike
18.4%
Advanced Pitching Stats
Loading Advanced Pitching Stats...
Defensive Stats
Loading MLB Defensive Stats...
Stats Vs Today's Lineup
Want more matchup stats?
View Jason Adam vs. Batter Stats
Loading Matchup Stats...
Rays Depth Chart
Our full team depth charts are reserved for RotoWire subscribers.
Subscribe Now
Recent RotoWire Articles Featuring Jason Adam
The Z Files: OK, I'm SOLD
Yesterday
Yesterday
Todd Zola reconsiders his stance against adding holds as a roto category, and takes a look at the impact it would have on relievers like Devin Williams.
Closer Encounters: 2022 Saves in Review, Part 1
52 days ago
52 days ago
Ryan Rufe recaps this past season's saves landscape. Just how many teams preferred closer committees over the conventional approach?
MLB: Postseason Cheat Sheet and Strategy
58 days ago
58 days ago
Todd Zola tackles the MLB Postseason Cheat Sheet for RotoWire and discusses his approach to postseason leagues this year.
Collette Calls: Scoring Tweaks
64 days ago
64 days ago
Jason Collette advocates for more experimentation with scoring setups in order to give fantasy relevance to a larger pool of pitchers.
MLB: Six Underrated Players for the Final Weeks
83 days ago
83 days ago
Corbin Young highlights three veteran hitters and three interesting relievers to consider for the final few weeks of the season.
Past Fantasy Outlooks
2022
2015
2014
2013
The 30-year-old righty was non-tendered by the Cubs after posting a 5.91 ERA in a small sample of 10.2 innings last season, but the Rays evidently saw enough to offer him a major-league deal. His appeal is likely related to his ability to miss bats, as he owns a 37.0 percent strikeout rate in 24.1 innings across the last two seasons, which should theoretically be high enough to offset his 13.0 percent walk rate. He'll contend for a bullpen role this spring.
Despite a fastball that can reach the high-90s and decent strikeout rates, Adam struggled for a second consecutive season as starter with a 5.03 ERA at Double-A. He was then moved to the bullpen at Triple-A and had success with a 2.35 ERA and 11:4 K:BB ratio in 15.1 innings, which likely prompted the Twins to trade for him in August. Adam has had decent strikeout rates and good control in his minor league career, but has given up too many hits. A change of scenery and a move to the bullpen could turn his career around. He'll likely begin the season at Triple-A Rochester.
Though Adam showed only minimal growth in his jump to Double-A in 2013, he still remains relatively high on the Royals' prospect list. He posted a solid 7.9 K/9 over 144 innings and dropped his HR/9 to 0.8, but seemed to struggle more with his command and saw his walk rate nearly double from the year before. Following the season, the team sent him to the Arizona Fall League to face stronger competition and while he fixed some of his command issues, he found himself victimized by the long ball once again. Obviously a work in progress, Adam still projects as an eventual middle-of-the-rotation hurler whose big, strong frame should allow him to eat plenty of innings. The club may start him off at Double-A again, but he should earn himself a promotion to the Triple-A level before the season is through.
Adam was a fifth-round pick in 2010 and has quickly ascended the prospect ranks in Kansas City. He projects as a middle-of-the-rotation starter who should be a true innings-eater given his big, strong frame. He threw 158 innings in High-A last year and posted a 3.53 ERA with 123 strikeouts to just 36 walks. He will likely start the season at Double-A Northwest Arkansas in 2013, but looks like he could still be another year or two away from having a major league impact.
More Fantasy News