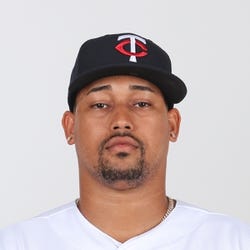 2022 Stats
W-L
2-4
ERA
1.86
WHIP
0.98
K
89
SV
8
2023 Projections
W-L
ERA
WHIP
K
SV
Unlock Our Projections
2023 Fantasy Outlook
Duran impressed the Twins during spring training and made the Opening Day roster as part of the bullpen. It was a role change for the career-long starter, but the rookie adapted quickly and was dominant from the outset. Duran threw a league-leading 392 pitches at 100 mph or greater while averaging a ridiculous 101 mph on his 4-seamer. He complemented his fastball with a knee buckling curve (49.7% whiff percentage) that served as his primary strikeout pitch, leading to a 33.5% strikeout rate. Duran also induced plenty of ground balls (61%) while limiting his free passes (6%) to finish with impressive ratios. With Minnesota struggling to hold leads in the late innings, Duran earned high leverage opportunities rather quickly. He tallied 18 holds on the season, but only finished with eight saves despite the upside for more. Upside is the key word, as he could be a top 5 closer in the league with full-time duties, but there's a greater chance the Twins are more flexible with his role. Read Past Outlooks
read more
RANKSFrom Preseason
#

* Exit Velocity, Barrels/BBE %, Balls Hit 95+ MPH %, and Spin Rate are benchmarked against 2019 data (min 30 IP). See here for more exit velocity/barrels stats plus an explanation of current limitations with that data set.
K/BB
5.56
K/9
11.8
BB/9
2.1
HR/9
0.8
Fastball
100.9 mph
ERA
1.86
WHIP
0.98
BABIP
.302
GB/FB
3.48
Left On Base
88.5%
Exit Velocity
82.5 mph
Barrels/BBE
1.7%
Spin Rate
2190 rpm
Balls Hit 95+ MPH
18.4%
Swinging Strike
17.9%
Prospect Rankings History
View Complete Jhoan Duran Prospect Ranking History
Advanced Pitching Stats
Loading Advanced Pitching Stats...
Defensive Stats
Loading MLB Defensive Stats...
Stats Vs Today's Lineup
Want more matchup stats?
View Jhoan Duran vs. Batter Stats
Loading Matchup Stats...
Twins Depth Chart
Our full team depth charts are reserved for RotoWire subscribers.
Subscribe Now
Recent RotoWire Articles Featuring Jhoan Duran
2023 Fantasy Baseball Rankings - Way Too Early Top 300 Draft Ranks
40 days ago
40 days ago
James Anderson provides a way too early top 300 rankings for those who have the itch to start drafting for 2023.
The Z Files: Saving the Best for First
42 days ago
42 days ago
Todd Zola discusses the strategic decisions made to lock up a 2022 title in the Premature Edraftulation League, and nabs Trea Turner to headline the 2023 roster.
Closer Encounters: 2022 Saves in Review, Part 2
42 days ago
42 days ago
Ryan Rufe recaps the saves landscape in this year's NFBC Main Event and shares his own hits and misses from this past season.
Closer Encounters: 2022 Saves in Review, Part 1
48 days ago
48 days ago
Ryan Rufe recaps this past season's saves landscape. Just how many teams preferred closer committees over the conventional approach?
Collette Calls: Scoring Tweaks
60 days ago
60 days ago
Jason Collette advocates for more experimentation with scoring setups in order to give fantasy relevance to a larger pool of pitchers.
Past Fantasy Outlooks
2022
2021
2020
2019
Duran is one of Minnesota's top pitching prospects, but he threw just 16 innings last season due to elbow issues. He could contend for the major league rotation later this season, but his workload may be managed as he works his way back to form. Duran relies on a power sinker and a fastball that has touched triple digits on the radar gun, but needs to find a third pitch to complement his sinker and equally nasty splitter to stick as a starter. He could also figure into the bullpen mix and is a dark horse to close games thanks to his velocity.
The 23-year-old spent all of last season at the Twins' alternate training site but didn't appear in a big-league game, which was not a surprising development for a pitcher who had only 37 innings at Double-A on his ledger. Duran is one of the arms in pipeline for Minnesota that made Brusdar Graterol expendable. Like Graterol, Duran relies on a power sinker that has touched triple digits on the radar gun, but he also features a more athletic 6-foot-5 frame that might be better suited for a rotation role in the long run. He'll need to find a third pitch to complement his sinker and equally nasty splitter to stick as a starter, but his arsenal is more than good enough to thrive as a high-leverage reliever if he doesn't. Duran will look to get his development back on track in 2021, likely at Triple-A, and could make his Twins debut this season.
Duran has a couple monster pitches and has not logged a FIP over 3.93 in full-season ball, but he may fit best as a power reliever long term. A 6-foot-5, 230-pound righty who headlined Minnesota's return for Eduardo Escobar in the 2018 deadline deal with Arizona, Duran's best skill is an ability to generate groundballs at an elite clip (65.4 GB% at Low-A, 52.9 GB% at High-A, 63.3 GB% at Double-A since joining the Twins). He accomplishes this with a four-seam fastball that can touch triple digits and a unique low-90s split-fingered sinker -- both rate as plus-plus pitches. Duran could easily slot into a big-league bullpen as is and have success. In order to make it as a starter at the highest level, however, he will need to turn his curveball into a reliable third pitch while demonstrating at least fringe-average command. Look for him to spend the bulk of 2020 in the upper levels of the minors.
Duran has an electric arm (100+ mph fastball), plus an ideal 6-foot-5, 175-pound frame for a 20-year-old hurler and developing secondary pitches in his slider and changeup. Duran's command needs some work for him to make it as a starter, but he has plenty of time to get that ironed out.
More Fantasy News