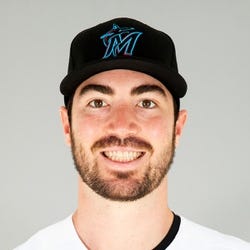 Calculate Stats Over Time
Just click on any two dates.
Loading Minor League Pitching Game Log...
Left/Right Pitching Splits
Since 2020
-2%
BAA vs LHP
2022
No Stats
2021
-11%
BAA vs RHP
2020
-26%
BAA vs LHP
Home/Away Pitching Splits
Since 2020
-43%
ERA at Home
2022
No Stats
2021
-22%
ERA at Home
2020
-100%
ERA at Home
Advanced Pitching Stats
Loading Advanced Pitching Stats...
Defensive Stats
Loading MLB Defensive Stats...
Stats Vs Today's Lineup
Want more matchup stats?
View John Curtiss vs. Batter Stats
Loading Matchup Stats...
Mets Depth Chart
Our full team depth charts are reserved for RotoWire subscribers.
Subscribe Now
Recent RotoWire Articles Featuring John Curtiss See More
NL FAAB Factor: Waiver Pickups of the Week
September 19, 2021
September 19, 2021
The season may be winding down, but Jan Levine continues to offer a number of NL names to get you through the fantasy schedule.
The Z Files: Changing Wins to Innings and Saves to Solds
February 26, 2021
February 26, 2021
Todd Zola examines the impact of new scoring categories on the pitching side, including the rise in value of top set-up men like Tyler Duffey.
Collette Calls: 2021 AL East Bold Predictions
February 11, 2021
February 11, 2021
Jason Collette continues his Bold Predictions series with the American League East. Find out why Bo Bichette could disappoint fantasy owners this season.
Rounding Third: Appealing to Authority
January 10, 2021
January 10, 2021
The Rays signed Michael Wacha in a lesser-noticed move in December. Does the fact that it's the Rays that added him make him more interesting for fantasy purposes?
DraftKings MLB: Thursday Breakdown
October 15, 2020
October 15, 2020
Christopher Olson previews Thursday’s pair of games, turning to Cody Bellinger at $4,900 in Game 4 against Atlanta.
Past Fantasy Outlooks
2021
2018
2017
Following an awful 2019 campaign during which he registered a 7.75 ERA and walked 22 batters in 33 innings between two Triple-A clubs, Curtiss was released by the Phillies and faced an uncertain future. In a career-changing turn of events, the Rays swooped in and did what they do best, helping Curtiss adjust his mechanics and emerge as one of the AL's top middle relievers. The right-hander thrived in his first extended big-league opportunity, posting a 1.80 ERA and 0.96 WHIP over 25 innings. Whereas he couldn't seem to find the strike zone the previous season, Curtiss demonstrated exquisite control in 2020, registering a minuscule 3.0 BB%. Meanwhile, he relied almost exclusively on a mid-90s fastball and effective slider to register a 25.3 K%. Curtiss' 3.57 xFIP portends some regression over a full season, but he's locked into a middle-relief role with an occasional opportunity to open.
Curtis had an impressive season at Triple-A last year with a 1.85 ERA and 12.3 K/9. He struggled in his first trip to the majors with a 8.31 ERA and allowing nine hits and two home runs in 8.2 innings. However, he had a 10.4 K/9 in the majors. He should be back in the majors at some point this summer due to his velocity (95.2 mph average fastball) and decent control. He could have a high-leverage role in the bullpen eventually if he can improve his off-speed pitches.
The 6th-round 2014 draft pick had an impressive 12.5 K/9 between High-A and Low-A last season. He then followed up with a 2.84 ERA and 12.8 K/9 in the Arizona Fall League. He'll begin in Double-A and could advance rapidly as the Twins are in need of bullpen arms with high strikeout rates.
More Fantasy News