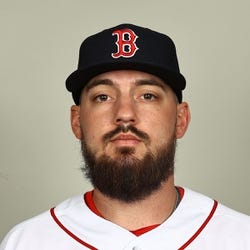 2022 Stats
W-L
4-4
ERA
2.22
WHIP
0.98
K
74
SV
8
2023 Projections
W-L
ERA
WHIP
K
SV
Unlock Our Projections
2023 Fantasy Outlook
After beginning his career in the Tigers organization, Schreiber was scooped up by Boston prior to the 2021 season. He spent most of that year in the minors, then failed to break camp with the Red Sox in 2022 despite an impressive spring. The right-hander made his season debut in late April and ripped off 11 straight appearances without allowing an earned run, spanning 12 innings. Schreiber tallied two wins, a save and three holds during that streak to instantly become one of Boston's primary high leverage anchors. He'd tack on another 19-game scoreless streak before the All Star break and finished the year with a 2.22 ERA, 0.98 WHIP and 74:19 K:BB over 65 innings. To add to that impressive line, he also racked up 22 holds and tied for the team lead with eight saves. After a breakout year in high leverage, Schreiber is firmly in Boston's closer mix for 2023, if not already the leading option for saves. Read Past Outlooks
read more
League Majors
Bats R
Throws R
40 Man Yes
Height 6'2"
Weight 210
DOB 3/5/1994
Born Wyandotte, MI
College Northwestern Ohio
Drafted 15th Rd 2016 DET
$Signed a one-year contract with the Red Sox in March of 2022.