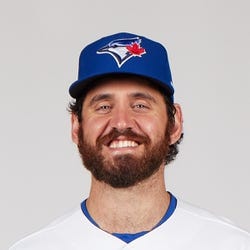 2022 Stats
W-L
5-4
ERA
2.11
WHIP
1.02
K
73
SV
36
2023 Projections
W-L
ERA
WHIP
K
SV
Unlock Our Projections
2023 Fantasy Outlook
Romano established himself as a reliable, top-end closer in 2022, recording 78.3% of Toronto's saves, which was the fourth-highest percentage among all relievers. His 36 saves tied for fourth in the league, while his 64 innings in 63 appearances were also career highs. Romano posted a career best walk rate (8.1%), though his strikeout rate dipped 5.3 percentage points to a still above-average 28.3%. Interestingly, Romano reversed his pitch usage for the fourth straight year, throwing his fastball (48% pitch usage) far less often than he did in 2021. This is notable since Romano's heater has been more effective than his slider in recent seasons. He did lose some velocity on the fastball, but still averaged 96.9 mph, which was in the 92nd percentile. The Blue Jays retained John Schneider as their manager, who has relied on Romano heavily since taking over. Expect another season with 30-plus saves. Read Past Outlooks
read more
RANKSFrom Preseason
#

* Exit Velocity, Barrels/BBE %, Balls Hit 95+ MPH %, and Spin Rate are benchmarked against 2019 data (min 30 IP). See here for more exit velocity/barrels stats plus an explanation of current limitations with that data set.
K/BB
3.48
K/9
10.3
BB/9
3.0
HR/9
0.6
Fastball
96.9 mph
ERA
2.11
WHIP
1.02
BABIP
.271
GB/FB
1.21
Left On Base
79.1%
Exit Velocity
82.9 mph
Barrels/BBE
3.6%
Spin Rate
2186 rpm
Balls Hit 95+ MPH
26.0%
Swinging Strike
14.6%
Advanced Pitching Stats
Loading Advanced Pitching Stats...
Defensive Stats
Loading MLB Defensive Stats...
Stats Vs Today's Lineup
Want more matchup stats?
View Jordan Romano vs. Batter Stats
Loading Matchup Stats...
Blue Jays Depth Chart
Our full team depth charts are reserved for RotoWire subscribers.
Subscribe Now
Recent RotoWire Articles Featuring Jordan Romano
Collette Calls: Pitching Bold Predictions Reviews
41 days ago
41 days ago
Jason Collette analyzes what he got right and what he got wrong with his preseason pitching predictions, including an outstanding season from Dylan Cease.
2023 Fantasy Baseball Rankings - Way Too Early Top 300 Draft Ranks
43 days ago
43 days ago
James Anderson provides a way too early top 300 rankings for those who have the itch to start drafting for 2023.
Closer Encounters: 2022 Saves in Review, Part 2
45 days ago
45 days ago
Ryan Rufe recaps the saves landscape in this year's NFBC Main Event and shares his own hits and misses from this past season.
Closer Encounters: 2022 Saves in Review, Part 1
51 days ago
51 days ago
Ryan Rufe recaps this past season's saves landscape. Just how many teams preferred closer committees over the conventional approach?
MLB Playoff Picks: MLB Wild Card Betting Preview
57 days ago
57 days ago
Erik Halterman previews each series from the Wild Card round of the MLB playoffs and offers up his best bets and player props.
Past Fantasy Outlooks
2022
2021
2020
After his 2020 breakout in high-leverage, Romano was the favorite to break camp as Toronto's closer after Kirby Yates underwent Tommy John surgery in late-March. However, it was Julian Merryweather who earned the first two saves for the Blue Jays. Injuries to Merryweather and Rafael Dolis eventually forced Toronto to use Romano in the ninth and he'd carry the closer role for the rest of the season after picking up his first save in late May. He went 23-for-24 in save chances overall while posting a 2.14 ERA, 1.05 WHIP and 33.6 K%. His fastball velocity (98-mph) spiked again and his 23.7 K-BB% ranked 21st among qualified relievers. Romano proved he can handle the closing duties quite well, but his 2022 role depends on Toronto's offseason plans. The Canadian has one more season before he's eligible for salary arbitration and it's possible he returns to a more flexible high-leverage role.
With Ken Giles out the door, Romano looked like he might be in line to close after he finished third on the team behind Giles and Rafael Dolis last year with two saves. However, with the offseason addition of Kirby Yates, Romano moves down the ladder. In a small sample of 14.2 innings, the 27-year-old looked like a high-leverage reliever, posting a 1.23 ERA, 36.8 K% and 58.1 GB%. His 8.8 BB% was perfectly fine as well. That all represented a big step forward from his performance in a similar sample of 15.1 innings as a rookie in 2019. Putting a ton of trust into a reliever who's been good for less than 15 frames and who was never much of a prospect is tough to do, but relievers do pop up out of nowhere all the time, and Romano's significant velocity gains give reason to believe there's something there. His fastball jumped from 94.6 to 96.3 mph last season, while his slider spiked from 84.8 to 89.9 mph.
Romano spent most of his minor-league career as a starter but was used exclusively in relief by the Blue Jays last season. The right-hander made 17 appearances in his rookie campaign, logging 15.1 innings and struggling to a 7.63 ERA (6.41 FIP). The transition to relief enabled Romano to condense his arsenal to two pitches -- a 94-95 mph four-seam fastball and an 84-85 mph slider -- and ditch his subpar changeup. As a result, he notched an excellent 28.0 K% in his brief stint with Toronto and an even better 31.9 K% in 24 games (21 as a reliever) at the Triple-A level. However, when Romano wasn't striking out batters he was too often allowing them to reach base, posting a 12.0 BB% and getting scorched by a 36.4 HR/FB%. Romano has been considerably better in both areas throughout his minor-league career, so the hope is that he'll settle in with more experience and eventually compete for a late-inning role.
More Fantasy News