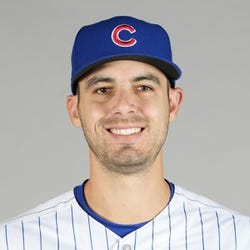 * Exit Velocity, Barrels/BBE %, Balls Hit 95+ MPH %, and Spin Rate are benchmarked against 2019 data (min 30 IP). See here for more exit velocity/barrels stats plus an explanation of current limitations with that data set.
K/BB
3.29
K/9
7.8
BB/9
2.4
HR/9
1.4
Fastball
97.3 mph
ERA
6.75
WHIP
1.43
BABIP
.341
GB/FB
1.37
Left On Base
55.6%
Exit Velocity
83.9 mph
Barrels/BBE
6.6%
Spin Rate
2211 rpm
Balls Hit 95+ MPH
26.5%
Swinging Strike
10.5%
Prospect Rankings History
View Complete Julian Merryweather Prospect Ranking History
Advanced Pitching Stats
Loading Advanced Pitching Stats...
Defensive Stats
Loading MLB Defensive Stats...
Stats Vs Today's Lineup
Want more matchup stats?
View Julian Merryweather vs. Batter Stats
Loading Matchup Stats...
Cubs Depth Chart
Our full team depth charts are reserved for RotoWire subscribers.
Subscribe Now
Recent RotoWire Articles Featuring Julian Merryweather See More
MLB: Postseason Cheat Sheet and Strategy
116 days ago
116 days ago
Todd Zola tackles the MLB Postseason Cheat Sheet for RotoWire and discusses his approach to postseason leagues this year.
Mound Musings: My 2022 Home League Pitching Staff
291 days ago
291 days ago
Brad Johnson offers insight into the pitching staff of his hometown fantasy league, beginning with his No.1 pitcher, Dodger Julio Urias.
Collette Calls: 2022 AL East Bold Predictions
December 30, 2021
December 30, 2021
Jason Collette begins his Bold Predictions series with a trip through the AL East. Can Gary Sanchez return to top 5 catcher status?
Collette Calls: Bold Predictions Accountability - Pitchers
October 15, 2021
October 15, 2021
Jason Collette grades his preseason predictions, and while missed a few here and there, he nailed Lance McCullers as a solid investment.
Mound Musings: The Greybeards
September 16, 2021
September 16, 2021
Brad Johnson puts together a hypothetical seven-man starting rotation with players who are 36 or older, starting with Houston's Justin Verlander.
Past Fantasy Outlooks
2022
2021
2018
The 30-year-old nabbed two saves early in 2021 and was in the mix at closer with Jordan Romano, but Merryweather then went down with an oblique injury and was sidelined until September. Romano took a firm hold of the closer's role in his absence, while Merryweather surrendered seven runs over 8.2 frames after returning from the injury. The right-hander still offers plenty of velocity and has some upside, but he has only 26 big-league innings under his belt. Merryweather could work in a high-leverage role for Toronto if he can stay healthy, but he's unlikely to be a factor for saves if Romano remains available and productive.
Toronto thought enough of Merryweather to trade from him in 2018 while he was in the midst of recovering from Tommy John surgery, and they doubled down on their investment by promoting him to the big leagues last season despite the fact that he had thrown only six innings in 2019. The right-hander excelled after the promotion, registering a 2.27 FIP and 27.3 K% over 13 innings while functioning as both a reliever and an opener before going down with right elbow tendinitis late in the campaign. Merryweather proved that the TJS did not take the zip off his fastball, as he averaged 96.7 mph while holding hitters to a .188 BA on the offering. He also did well with his changeup, perhaps previewing the combination that can help him find success in the majors. Merryweather's age (29) makes him much older than most prospects, so he should get a shot to perform -- either as a starter or reliever -- in 2021.
We are taught to ignore 26-year-old prospects, and that is typically wise. But inevitably that will lead to missing on guys like Mike Clevinger and Zack Godley. Merryweather has a chance to fall into that same bucket of late-blooming mid-rotation starters. The athletic 6-foot-4 righty operates with a deceptive delivery, hiding the ball well until it is released. This allows his low-90s fastball to play up slightly. Merryweather has two average pitches in his curveball and changeup, but both secondaries can flash plus. He dominated at Double-A, which should be expected given his age and stuff. But while he posted a 3.89 xFIP over 16 starts at Triple-A, he was hit pretty hard (.327 AVG, 1.5 HR/9). Some of that can be attributed to bad luck. He had the second worst BABIP (.388) and fifth worst HR/FB (15.7) in the International League. The Indians have enviable rotation depth, so Merryweather may not get a lengthy look in the big-league rotation in 2018, but if the injury bug bites, he will be ready.
More Fantasy News