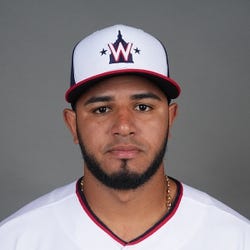 2022 Stats
AVG
.251
HR
7
RBI
36
R
33
SB
6
2023 Projections
AVG
HR
RBI
R
SB
Unlock Our Projections
2023 Fantasy Outlook
The key piece in the return for Trea Turner and Max Scherzer, Ruiz did not take off in the way the Nationals were surely hoping for, but it's important to remember that not all growth is linear. Ruiz displayed advanced contact skills at age 23/24, striking out at just an 11.5% clip. He hit for a .251 average which is respectable enough though his Statcast xBA was all the way up at .277, ranking in the top 10% of the league. The thump was lacking, with Ruiz's hard-hit and barrel rates leaving a lot to be desired, but the extra-base pop is in there as evidenced by his 24 homers across three levels in 2021. The bat-to-ball skills give him a great foundation to build on and Ruiz can run a little bit, bringing an element that is rare for the catcher position. There is some sneaky upside here as the playing time is locked in. Ruiz ended the year on the injured list with a testicular contusion but there has been nothing to suggest his offseason routine will be affected. Read Past Outlooks
read more
RANKS
#175
ADP
#