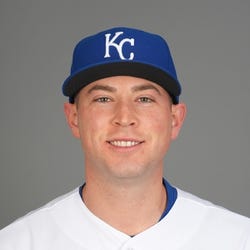 2022 Stats
W-L
3-13
ERA
5.58
WHIP
1.70
K
110
SV
0
2023 Projections
W-L
ERA
WHIP
K
SV
Unlock Our Projections
2023 Fantasy Outlook
Bubic's 2022 was ugly, there's no questioning that. To an extent, there's some reason to be encouraged, as his .352 BABIP was unusually high and his 4.77 FIP suggests his 5.58 ERA was a bit unlucky. Still, the under-the-surface numbers don't paint a great picture, and it all comes back to one of the worst walk rates in the majors. His 4.4 BB/9 was the worst of his career, but he's never kept it under 4.0 in a single season. Bubic's fastball was up to nearly 92 mph last year, but the increase in velocity strangely led to worse results -- hitters batted .348 and slugged .587 off the pitch he threw 50.5 percent of the time last year. Bad luck aside, a change in pitching coach could help Bubic, but the 25-year-old has yet to iron out the flaws in his game that would allow him to at least hover around league-average. Read Past Outlooks
read more
RANKSFrom Preseason
#

* Exit Velocity, Barrels/BBE %, Balls Hit 95+ MPH %, and Spin Rate are benchmarked against 2019 data (min 120 IP). See here for more exit velocity/barrels stats plus an explanation of current limitations with that data set.
K/BB
1.75
K/9
7.7
BB/9
4.4
HR/9
1.3
Fastball
91.9 mph
ERA
5.58
WHIP
1.70
BABIP
.352
GB/FB
1.46
Left On Base
68.1%
Exit Velocity
81.9 mph
Barrels/BBE
4.9%
Spin Rate
2110 rpm
Balls Hit 95+ MPH
25.6%
Swinging Strike
9.5%
Prospect Rankings History
View Complete Kris Bubic Prospect Ranking History
Advanced Pitching Stats
Loading Advanced Pitching Stats...
Defensive Stats
Loading MLB Defensive Stats...
Stats Vs Today's Lineup
Want more matchup stats?
View Kris Bubic vs. Batter Stats
Loading Matchup Stats...
Royals Depth Chart
Our full team depth charts are reserved for RotoWire subscribers.
Subscribe Now
Recent RotoWire Articles Featuring Kris Bubic
MLB Picks Tonight: Expert MLB Bets for Saturday, September 24
74 days ago
74 days ago
Juan Carlos Blanco finds some bets he likes in a pair of potentially lopsided matchups on Sunday's MLB slate.
Weekly Pitcher Rankings: And Then There Was One
74 days ago
74 days ago
Robbie Ray tops Todd Zola's weekly pitcher rankings thanks to a pair of home matchups against a pair of struggling opponents.
FanDuel MLB: Saturday Targets
74 days ago
74 days ago
Chris Bennett features a few reasonably-salaried pitchers and hitters.
DraftKings MLB: Saturday Breakdown
74 days ago
74 days ago
Framber Valdez has been excellent all season and Chris Morgan doesn't see that form dipping against the Orioles.
Yahoo DFS Baseball: Saturday Picks
74 days ago
74 days ago
Chris Morgan doesn't have much confidence in Chad Kuhl at Coors Field and has selected a few Padres to take advantage of the altitude.
Past Fantasy Outlooks
2022
2021
2020
The Royals system is stocked with promising young arms. While Bubic sits a bit down the pecking order, he received a head start with an accelerated 2020 debut straight out of High-A. The lefty took a small step back last season with a lower K% and higher BB%. However, neither change is cause for concern, especially since he's just 24 years old with 180 major league frames under his belt. With the requisite sample size caveat in tow, it's always encouraging when a young pitcher exhibits second half improvement and Bubic's K% jumped three ticks over the final two months. As intimated, Bubic doesn't have the prospect pedigree of others, but he can develop into a fantasy-worthy innings compiler. At his age, there is always the chance for improvement, but a 90-mph fastball does not portend emerging dominance.
While Bubic's 2020 stats do little to excite, we have to remember he was making the jump from High-A after the Royals took him with the 40th overall pick in the 2018 draft. Bubic had a 2.30 ERA across 101.2 innings at High-A Wilmington in 2019, backed up by a strong 21.2 K-BB% and 0.27 HR/9. The dramatic jump in competition proved difficult for the lefty, as evidenced by the 1-6 record and 1.48 WHIP, but he showed flashes in September in what were ultimately losses to the White Sox and Brewers. Still just 23 years old, Bubic could probably use a bit more seasoning after his arrival was expedited last season. The Royals are suddenly looking to compete and may indeed push Bubic back to the farm to start 2021. He currently lacks a true put-away pitch, but the AL Central is ripe for the picking. If he's getting starts, Bubic will immediately become a bench/streaming candidate, albeit a risky one.
Leading MiLB in strikeouts is hardly a feat that portends greatness, but there are some big hits (Brandon Woodruff in 2016, Jose Berrios in 2015) mixed in with the duds (Dean Kremer in 2018, Alec Hansen in 2017, Taylor Cole in 2014). Bubic joined this club by fanning 185 in 149.1 innings across stops at Low-A and High-A in his age-21 season. A 6-foot-3, 220-pound lefty with a low-90s fastball, plus changeup and average curveball, Bubic projects as more of a No. 4 or No. 5 starter long term. That said, any big southpaw with good command and a plus changeup has a chance to beat projections, and we won't learn a lot about his future prospects until we see how he handles Double-A and Triple-A. Bubic is part of a hoard of quality Royals pitching prospects with ETAs of 2021. His home park makes him more appealing than he would otherwise be, and if his breaking ball improves, he could develop into a No. 3 starter.
More Fantasy News