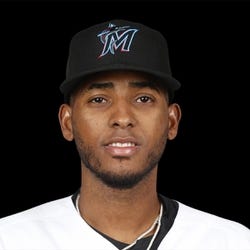 * Exit Velocity and Barrels/PA % are benchmarked against 2019 data (min 400 PA) and Hard Hit Rate is benchmarked against last season's data (min 400 PA). See here for more exit velocity/barrels stats plus an explanation of current limitations with that data set.
BB/K
0.20
BB Rate
6.3%
K Rate
31.0%
BABIP
.214
ISO
.119
AVG
.169
OBP
.224
SLG
.288
OPS
.512
wOBA
.229
Exit Velocity
88.3 mph
Hard Hit Rate
25.9%
Barrels/PA
3.4%
Expected BA
.167
Expected SLG
.262
Sprint Speed
21.3 ft/sec
Ground Ball %
37.0%
Line Drive %
16.7%
Fly Ball %
46.3%
Prospect Rankings History
Advanced Batting Stats
Loading Advanced Batting Stats...
Additional Stats
Games By Position
Defensive Stats
Loading Games Played by Position...
Loading MLB Defensive Stats...
Batted Ball Stats
Loading Batted Ball Stats...
Stats Vs Upcoming Pitchers
Want more matchup stats?
View Lewin Diaz vs. Pitcher Stats
Loading Matchup Stats...
Orioles Depth Chart
Our full team depth charts are reserved for RotoWire subscribers.
Subscribe Now
Recent RotoWire Articles Featuring Lewin Diaz See More
NL FAAB Factor: Waiver Pickups of the Week
178 days ago
178 days ago
Jan Levine anticipates the return of a fairly high-profile pitcher to the LA rotation.
NL FAAB Factor: Waiver Pickups of the Week
192 days ago
192 days ago
With only a couple days before the trade deadline, Jan Levine checks out a few NLers who could benefit from upcoming transactions.
NL FAAB Factor: Waiver Pickups of the Week
234 days ago
234 days ago
Jan Levine highlights a few players who may be ready to return soon, including a certain Cincinnati outfielder.
DraftKings MLB: Sunday Breakdown
October 3, 2021
October 3, 2021
Dan Marcus mentions a number of stacks that should do well today.
NL FAAB Factor: Waiver Pickups of the Week
September 12, 2021
September 12, 2021
Among his list of candidates, Jan Levine profiles a number of recent injury returnees who should be able to immediately help you out.
Past Fantasy Outlooks
2021
2020
2017
Diaz spent most of last season at the Marlins' alternate training site, but he did see a three-week stint in the majors, during which he slashed .154/.195/.205 over 41 plate appearances. The big first baseman hit for very little power (.051 ISO) and struck out too often (29.3 K%), belying his expected strengths at the plate. Diaz possesses substantial raw power, which he used to belt 27 homers over two levels in 2019. He has never taken a lot of walks but has demonstrated a good eye at the plate, consistently logging contact rates in the low-80s and strikeout rates in the mid-to-high teens above rookie ball. The lefty hitter will likely never contend for a batting title or home-run crown, but he could emerge as a solid run producer in the big leagues. Diaz has a chance to be Miami's first baseman of the future, and he may get the opportunity to stake his claim for the position at some point in 2021.
The Marlins sent three pitchers, most notably Sergio Romo, to the Twins for Diaz, who now profiles as their first baseman of the future. He needed to be added to the 40-man roster this offseason and was a spare piece for the Twins, but Diaz has pedigree ($1.4 million bonus on July 2, 2013), plus raw power and struck out at a 19.1% clip at Double-A. He is also an above-average defender at first base. A .188 BABIP after the trade dragged down his numbers, but he upped his walk rate to 8.5%, which is easily his best mark above rookie ball. A rare first baseman who is better in batting average leagues than OBP leagues, Diaz probably won't ever finish as a top-10 fantasy first baseman, but the hope is that he has a handful of years as a top-20 option at the position. He will open the year at Triple-A and could earn his big-league debut this summer.
Diaz was signed for $1.4 million as a 17-year-old out of the Dominican Republic. He didn't show much in 2015 as an 18-year-old in rookie ball (.693 OPS), but he improved significantly in the more advanced Appalachian League. He hit .310 with nine home runs and a .928 OPS in 46 games. At 6-foot-3 and over 200 pounds, it's thought he could develop above-average power. He's someone to watch for a potential breakout in his first full-season league this year.
More Fantasy News