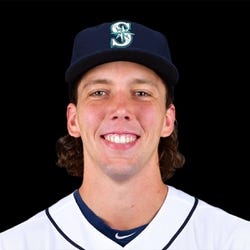 2022 Stats
W-L
13-6
ERA
3.20
WHIP
1.18
K
174
SV
0
2023 Projections
W-L
ERA
WHIP
K
SV
Unlock Our Projections
2023 Fantasy Outlook
The underlying stats of 2021 gave us enough positive signs that 2022 could be a big year for the sophomore hurler, and that is precisely what we saw from the young righty. Gilbert pitched with poise and polish normally not seen in a 25-year old pitcher as he commanded his fastball and flung five different pitches at hitters preferring to keep them off-balance over always pursuing the strikeout. His four-seam fastball has an above-average whiff rate due to the combination of velocity and extension on the pitch while none of his other offerings possess even an average whiff rate. His fastball command is what makes or breaks the approach and he will go places if he continues to pitch as he did in 2022. The flyball-heavy results leave him somewhat prone to the long ball and it will be interesting to see how the new balanced schedule impacts him as he had a 2.69 ERA against the bottom feeders of the AL West and a 3.45 ERA against the rest of the league. We also do not know how the near 70 inning increase in workload will impact him as it was a significant increase over his previous professional seasons. Read Past Outlooks
read more
RANKS
#118
ADP
#

* Exit Velocity, Barrels/BBE %, Balls Hit 95+ MPH %, and Spin Rate are benchmarked against 2019 data (min 120 IP). See here for more exit velocity/barrels stats plus an explanation of current limitations with that data set.
K/BB
3.55
K/9
8.4
BB/9
2.4
HR/9
0.9
Fastball
96.2 mph
ERA
3.20
WHIP
1.18
BABIP
.302
GB/FB
1.09
Left On Base
76.9%
Exit Velocity
81.9 mph
Barrels/BBE
3.9%
Spin Rate
2142 rpm
Balls Hit 95+ MPH
25.1%
Swinging Strike
11.4%
Prospect Rankings History
View Complete Logan Gilbert Prospect Ranking History
Advanced Pitching Stats
Loading Advanced Pitching Stats...
Defensive Stats
Loading MLB Defensive Stats...
Stats Vs Today's Lineup
Want more matchup stats?
View Logan Gilbert vs. Batter Stats
Loading Matchup Stats...
Mariners Depth Chart
Our full team depth charts are reserved for RotoWire subscribers.
Subscribe Now
Recent RotoWire Articles Featuring Logan Gilbert See More
2023 Fantasy Baseball Rankings - Way Too Early Top 300 Draft Ranks
102 days ago
102 days ago
James Anderson provides a way too early top 300 rankings for those who have the itch to start drafting for 2023.
The Z Files: Saving the Best for First
104 days ago
104 days ago
Todd Zola discusses the strategic decisions made to lock up a 2022 title in the Premature Edraftulation League, and nabs Trea Turner to headline the 2023 roster.
FanDuel MLB: Tuesday Division Series Targets
111 days ago
111 days ago
Chris Bennett looks over Tuesday's divisional-round slate and thinks it's worth finding the cap room for Justin Verlander.
MLB Picks Today: Expert MLB Bets for Tuesday, October 11
111 days ago
111 days ago
Michael Rathburn identifies best bets from all four MLB playoff games Tuesday as the Division Series get underway.
DraftKings MLB: Tuesday Breakdown
111 days ago
111 days ago
Dan Marcus previews Tuesday's MLB slate, which features all four Division Series kicking off for a packed day of postseason baseball.
Past Fantasy Outlooks
2022
2021
2020
Gilbert came out of a tiny pitching factory school in DeLand, Florida, which had already given us both Corey Kluber and Jacob deGrom, and began his efforts to make a name for himself. He made all of one start in Triple-A before coming up to stay in the big leagues and was as impressive as one could realistically expect in his rookie season. His high flyball rate led to more homers than we like to see from starters, but a 19.9 K-BB% as a rookie was impressive. He held the league to a .239 average and had a 1.17 WHIP, but the ERA was higher than expected. In fact, only seven other pitchers have ever posted an ERA over 4.00 with supporting stats such as the ones Gilbert had last season. Two of them also happened in 2021: Aaron Nola and Yu Darvish. Gilbert's big jump in workload increase is something to consider, not to mention there will be additional growing pains in that division.
Gilbert's stock has been steadily trending up over the past couple years, and that trend continued in 2020 at the Mariners' alternate training site. The 6-foot-6, 225-pound righty's fastball is one of the most effective pitches in the minors. It sits in the mid-90s (touches 97) and plays like a 70-grade pitch due to command, extension and riding life. If he can locate that pitch against big-league hitters, he will be successful. His changeup, curveball and slider all have above-average to plus potential, but they will play up even more than that due to the quality of his fastball. His fastball and changeup, specifically, have noticeably improved over the past calendar year. While he is more of a bat misser than a weak contact inducer, once he gets ahead in the count, hitters struggle to square stuff up because they have to be ready for the cheese. He should join Seattle's rotation early this season.
If we just listed Gilbert's arsenal, the hype would be moderate, but his statistical output in his first pro season led to significant excitement in dynasty leagues. The 6-foot-6 righty's low-to-mid-90s fastball plays up as a plus pitch due to excellent extension, but that is his lone 60-grade pitch. He throws two breaking balls that are solid and a changeup that is usable, but even if he developed plus command, Gilbert's ceiling is capped as a mid-rotation starter. He has the frame (225 pounds) to eat innings, and after logging nine starts at Double-A, he could make his big-league debut this summer if he continues to face little resistance in the minors. A No. 3 starter who can throw 180-plus innings is a valuable commodity in redraft leagues, but time and again prospects with that profile end up falling short of that projection for one reason or another. This is a good time to cash him out.
More Fantasy News