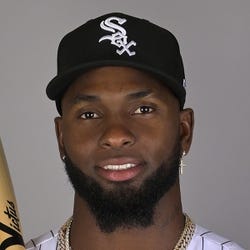 Out
Injury Wrist
Est. Return 2/1/2023
2022 Stats
AVG
.284
HR
12
RBI
56
R
54
SB
11
2023 Projections
AVG
HR
RBI
R
SB
Unlock Our Projections
2023 Fantasy Outlook
Robert's durability issues subsist after he was able to play in only 98 games, albeit a new personal high. He dealt with a groin issue, COVID-19, lightheadedness/blurred vision, a sprained wrist and a bruised hand. Through it all, Robert lowered his strikeout rate to a career-best 19.2%, but his average exit velocity dropped, and he hit more groundballs. The result was a drop in both power and batting average though Robert's running picked up a tad. With so many injuries over his first three seasons, it's impossible to gauge Robert's true skill level, other than to say it has the potential to be elite. Nothing in his litany of injuries appears to be chronic, so there is hope Robert can shake the health bug and develop. The temptation of a healthy season showing off plus power and speed is keeping Robert as a top-12 outfielder in early drafts. Giving in is a matter of risk management with such a huge reward. Read Past Outlooks
read more
RANKSFrom Preseason
#