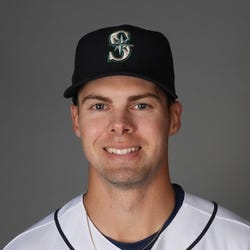 2022 Stats
W-L
4-4
ERA
4.44
WHIP
1.56
K
62
SV
0
2023 Projections
W-L
ERA
WHIP
K
SV
Unlock Our Projections
2023 Fantasy Outlook
Brash opened the year in the Mariners' starting rotation, but issued 17 walks and had a 2.05 WHIP through five starts and was subsequently demoted to the minors. After two months in Triple-A, he returned to Seattle as a reliever. The right-hander fared much better in this role, recording a 2.35 ERA, 1.24 WHIP and 43:16 K:BB over his final 30.2 innings. He still had one of the league's worst walk rates at 14.9%, but issued "only" 4.7 BB/9 in relief versus 7.7 BB/9 as a starter. Brash didn't find success with his 97 mph fastball (.379 BA), but his slider and curve were excellent. It's clear he has the stuff to be a shutdown reliever for the M's, but he'll need to improve his control to earn more high-leverage opportunities. Read Past Outlooks
read more
RANKS
#485
ADP
#

* Exit Velocity, Barrels/BBE %, Balls Hit 95+ MPH %, and Spin Rate are benchmarked against 2019 data (min 30 IP). See here for more exit velocity/barrels stats plus an explanation of current limitations with that data set.
K/BB
1.88
K/9
11.0
BB/9
5.9
HR/9
0.5
Fastball
96.9 mph
ERA
4.44
WHIP
1.56
BABIP
.347
GB/FB
2.10
Left On Base
72.2%
Exit Velocity
81.4 mph
Barrels/BBE
2.7%
Spin Rate
2642 rpm
Balls Hit 95+ MPH
21.3%
Swinging Strike
12.7%
Prospect Rankings History
View Complete Matt Brash Prospect Ranking History
Advanced Pitching Stats
Loading Advanced Pitching Stats...
Defensive Stats
Loading MLB Defensive Stats...
Stats Vs Today's Lineup
Want more matchup stats?
View Matt Brash vs. Batter Stats
Loading Matchup Stats...
Mariners Depth Chart
Our full team depth charts are reserved for RotoWire subscribers.
Subscribe Now
Recent RotoWire Articles Featuring Matt Brash See More
The Z Files: NFBC Holdem Rankings and Strategies
111 days ago
111 days ago
Todd Zola shares his gameplan and his rankings for NFBC Postseason Holdem contests.
MLB: Postseason Cheat Sheet and Strategy
115 days ago
115 days ago
Todd Zola tackles the MLB Postseason Cheat Sheet for RotoWire and discusses his approach to postseason leagues this year.
AL FAAB Factor: Waiver Pickups of the Week
119 days ago
119 days ago
Erik Siegrist provides a final look at available AL free agents for the 2022 season as Drew Waters looks to establish himself ahead of 2023.
Mound Musings: The “Kids on Parade” Watch List for 2023
122 days ago
122 days ago
As the MLB regular season draws to its conclusion, Brad Johnson presents his Kids on Parade list, and at the top sits Grayson Rodriguez, the Orioles' star prospect.
Mound Musings: One More Call to the Pen
143 days ago
143 days ago
Mound Musings sorts out some of the most unsettled bullpens, including in Seattle where Brad Johnson believes Andres Munoz will eventually get the closers job.
2022 Fantasy Outlook
Brash had thrown just 5.1 pro innings prior to last season, which ended up being a breakout campaign. He relied primarily on a 96-mph four-seam fastball that touched 100 mph and a low-to-mid-80s slider with elite spin and movement. Brash's slider is one of the best sliders currently in pro ball. He also throws a changeup and curveball, but those lag behind as distant third and fourth offerings, respectively. It's his command and control that he really needs to improve upon to reach his potential, however, as his changeup just needs to be passable for him to have success as a starter, and he may not even need a viable third pitch given how good his top two pitches are. The 6-foot-1 righty logged an 11.9 BB% in 97.1 innings at High-A and Double-A, and he can have trouble repeating his delivery. Already on the 40-man roster, Brash will begin the regular season in the major-league rotation, ahead of guys like George Kirby and Emerson Hancock. His fastball/slider combination is enough for him to have a fallback option as a shutdown reliever if starting doesn't work out.
More Fantasy News