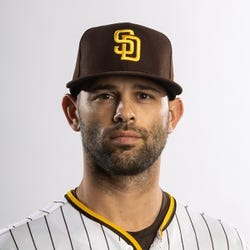 * Exit Velocity, Barrels/BBE %, Balls Hit 95+ MPH %, and Spin Rate are benchmarked against 2019 data (min 30 IP). See here for more exit velocity/barrels stats plus an explanation of current limitations with that data set.
K/BB
2.32
K/9
8.0
BB/9
3.5
HR/9
1.3
Fastball
93.4 mph
ERA
3.47
WHIP
1.29
BABIP
.283
GB/FB
1.57
Left On Base
80.2%
Exit Velocity
79.4 mph
Barrels/BBE
4.9%
Spin Rate
2221 rpm
Balls Hit 95+ MPH
24.2%
Swinging Strike
11.7%
Advanced Pitching Stats
Loading Advanced Pitching Stats...
Defensive Stats
Loading MLB Defensive Stats...
Stats Vs Today's Lineup
Want more matchup stats?
View Nick Martinez vs. Batter Stats
Loading Matchup Stats...
Padres Depth Chart
Our full team depth charts are reserved for RotoWire subscribers.
Subscribe Now
Past Fantasy Outlooks
2022
2018
2017
2016
2015
The Padres signed Martinez to a four-year contract during the offseason in order to increase their pitching depth, and he'll have a chance to win a spot at the back end of the starting rotation with a strong spring. The right-hander posted a 1.62 ERA in 23 starts in Japan last season, but he has been less successful in the major leagues, registering a 4.77 ERA and 1.45 WHIP across 415.1 career innings. Martinez's competition for the fifth starting spot will include Chris Paddack, Ryan Weathers and MacKenzie Gore.
A staple at the back end of the Texas rotation for the last four seasons, Martinez has never held much appeal outside of AL-only settings due to his poor peripherals. Martinez's ability to eat innings -- as well as a lack of attractive alternatives -- was enough to keep him around in 2017, but a slight uptick in velocity didn't do anything to improve his outlook. The meager gains Martinez made in controlling the zone were completely undermined by his failure to keep the ball in the yard, as Martinez's 2.1 HR/9 rate was the second-worst mark in the majors of any pitcher who covered 110 innings. The Rangers ultimately came to the realization that Martinez's flyball tendencies and lack of strikeout stuff weren't a recipe for success at Globe Life Park, prompting the team to non-tender him in the offseason. Martinez, who underwent sports hernia surgery in November, is expected to be at full strength for spring training, but he'll most likely have to settle for a minor-league deal coming off a career-worst campaign.
Martinez surprised many with a hot start to the 2015 season, although he fizzled out by the end of that campaign. Unfortunately for the 26-year-old and the Rangers alike, there was really no bright spot during his tenure in the big leagues in 2016. The right-hander began the season in the minor leagues, where he did find some success with his excellent control (1.55 BB/9), which helped him to a sound FIP (3.46). This performance afforded him some a few spot starts and some bullpen appearances with Texas throughout the season, but the results were not pretty: 5.59 ERA, 1.66 WHIP, 16:19 K:BB, and eight homers allowed in 38.2 innings. To make matters worse, these are the numbers he put up while allowing a below-average .285 BABIP. The Rangers' rotation is pretty thin behind Cole Hamels and Yu Darvish, but until Martinez can miss a few more bats and keep the ball in the park, he'll likely be relegated to a Quad-A swingman role with the ceiling of a long reliever.
Martinez started the year on an improbable 4-0 start with a 1.96 ERA over his first 55 innings (nine starts) despite a poor 30:17 K:BB ratio, including seven quality starts. As one would expect, that type of season wasn't sustainable over the long-haul given his continued poor peripherals, and his struggles led to several trips back and forth to Triple-A Round Rock, with just seven wins in 21 starts to go along with a poor 77:46 K:BB rate in 115.0 innings. His major-league career now consists of 265.1 IP, 285 hits allowed, 101 walks and just 154 Ks. There's no room for him in a healthy Texas rotation, though he may start the year as a starter if Yu Darvish isn't able to answer the bell on Opening Day. You'll want no part of Martinez, however.
Hey, a middling arm that the Rangers had to rely on much more than they could’ve possibly envisioned before 2014, that’s weird… they only had 126 of those last year. Fifteen different pitchers made at least one start for the Rangers and Martinez’s 24 were actually second-most. Now do you understand how the Rangers ended up with the worst record in the American League and third-worst overall? For his part, Martinez acquitted himself well enough with a 4.55 ERA, but there was nothing special about it. He didn’t strike anyone out, he walked too many, and he was quite lucky to escape with that ERA. He was destroyed at home (5.24 ERA) thanks to some horrid supporting stats (12.5% strikeout rate, 1.4 K:BB ratio), while somehow escaping with a 4.09 ERA on the road despite almost identical strikeout and walk numbers (12.7%, 1.4). He is penciled in for a starting role again in 2015, but he needn’t be considered for your team regardless of league format.
More Fantasy News