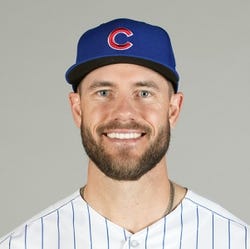 2022 Stats
AVG
.207
HR
25
RBI
66
R
67
SB
8
2023 Projections
AVG
HR
RBI
R
SB
Unlock Our Projections
2023 Fantasy Outlook
Wisdom continued to be a boom-or-bust fantasy option in 2022. A year after turning heads with 28 home runs, he followed it up with 25 long balls. However, Wisdom struggled to make consistent contact, as he batted just .207 and struck out 34.3 percent of the time. In 2021, he struck out more than 40 percent of the time. Going forward, it looks like fantasy managers will simply need to sacrifice batting average for power if they decide to roster Wisdom. He did at least show a slight uptick in stolen bases, as he registered a career-high eight stolen bases on 12 attempts, which was also easily a career best. That's not a huge number, but if he can get to 10 steals or more, it would give a little more depth to his game. Wisdom will turn 32 during the 2023 season, so even if he does run a bit more, he's unlikely to change too much as a player. The power is nice, but there are definitely more complete fantasy options available for the corner outfield spots. Read Past Outlooks
read more
RANKS
#436
ADP
#

* Exit Velocity and Barrels/PA % are benchmarked against 2019 data (min 400 PA) and Hard Hit Rate is benchmarked against last season's data (min 400 PA). See here for more exit velocity/barrels stats plus an explanation of current limitations with that data set.
BB/K
0.29
BB Rate
9.9%
K Rate
34.3%
BABIP
.274
ISO
.220
AVG
.207
OBP
.298
SLG
.426
OPS
.725
wOBA
.319
Exit Velocity
90.7 mph
Hard Hit Rate
37.0%
Barrels/PA
7.7%
Expected BA
.188
Expected SLG
.380
Sprint Speed
23.7 ft/sec
Ground Ball %
34.1%
Line Drive %
17.1%
Fly Ball %
48.8%
Advanced Batting Stats
Loading Advanced Batting Stats...
Additional Stats
Games By Position
Defensive Stats
Loading Games Played by Position...
Loading MLB Defensive Stats...
Batted Ball Stats
Loading Batted Ball Stats...
Stats Vs Upcoming Pitchers
Want more matchup stats?
View Patrick Wisdom vs. Pitcher Stats
Loading Matchup Stats...
Cubs Depth Chart
Our full team depth charts are reserved for RotoWire subscribers.
Subscribe Now
Past Fantasy Outlooks
2022
2019
Wisdom fell short of accumulating even 100 major-league plate appearances from 2018-20. The 29-year-old then got a chance to show what he could do last season and what he showed was a propensity to hit home runs and strike out. There were a ton of strikeouts. Like record setting. He is the only hitter with a strikeout rate over 40% since 1887 (min. 300 PA). When he finally makes contact, he has all the traits to generate home runs. He hits the ball in the air (31.4 GB%) and hits the ball hard (92nd percentile maxEV). He pulls the ball into short outfield corners (56.8 Pull%). The formula worked for a while, but the league adjusted to his fast start by staying out of the strike zone and making him chase pitches. The strikeout rate is a major drag on his entire profile; Wisdom will be tough to roster unless he shaves at least 10 percentage points off it.
Wisdom was called up for the first time shortly before his 27th birthday and posted an impressive .260/.362/.520 line in a small sample of 58 plate appearances for the Cardinals. That performance was good for a 141 wRC+, though he'll have to continue hitting for power if he's to maintain a mark anywhere near that level, as he struck out a worrisome 32.8% of the time. He'd never posted a slugging percentage as high as .520 at any minor-league stop, though he did slug .507 while hitting 31 homers in 127 games for Triple-A Memphis in 2017. Traded to Texas in December, Wisdom is now on a team in a hitter-friendly park with less competition for at-bats, so it's not inconceivable that he could have some sleeper value this year.
More Fantasy News