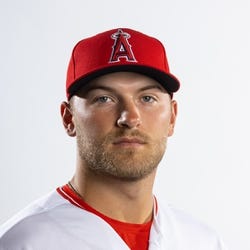 2022 Stats
W-L
7-6
ERA
3.77
WHIP
1.21
K
122
SV
0
2023 Projections
W-L
ERA
WHIP
K
SV
Unlock Our Projections
2023 Fantasy Outlook
If you have Detmers as the only pitcher to throw a complete game no-hitter in 2022 as a preseason prediction, come collect your prize. Detmers entered that contest in early May with a 5.19 ERA and 3 homers allowed in 17.1 innings and proceeded to blank the Rays. Six weeks later, he found himself demoted to Triple A after consecutive rough outings, but came back just before the break and closed the season 5-3 with a 3.04 ERA with an 18% K-BB% while scattering 1.3 baserunner per nine innings. His 25% strikeout rate belies his actual stuff as he must get ahead to use his breaking balls to survive. He lacks the stuff to pitch from behind and if batters do not chase the breaking stuff, he can quickly get into trouble. The profile is fraught with risk, so proceed with caution more than with gusto. Read Past Outlooks
read more
RANKSFrom Preseason
#

* Exit Velocity, Barrels/BBE %, Balls Hit 95+ MPH %, and Spin Rate are benchmarked against 2019 data (min 120 IP). See here for more exit velocity/barrels stats plus an explanation of current limitations with that data set.
K/BB
2.65
K/9
8.5
BB/9
3.2
HR/9
0.9
Fastball
93.2 mph
ERA
3.77
WHIP
1.21
BABIP
.286
GB/FB
1.02
Left On Base
72.6%
Exit Velocity
82.1 mph
Barrels/BBE
4.7%
Spin Rate
2081 rpm
Balls Hit 95+ MPH
22.6%
Swinging Strike
11.4%
Prospect Rankings History
View Complete Reid Detmers Prospect Ranking History
Advanced Pitching Stats
Loading Advanced Pitching Stats...
Defensive Stats
Loading MLB Defensive Stats...
Stats Vs Today's Lineup
Want more matchup stats?
View Reid Detmers vs. Batter Stats
Loading Matchup Stats...
Angels Depth Chart
Our full team depth charts are reserved for RotoWire subscribers.
Subscribe Now
Recent RotoWire Articles Featuring Reid Detmers
2023 Fantasy Baseball Rankings - Way Too Early Top 300 Draft Ranks
40 days ago
40 days ago
James Anderson provides a way too early top 300 rankings for those who have the itch to start drafting for 2023.
Collette Calls: Buckle Up
53 days ago
53 days ago
Jason Collette is excited for the increase in steals which the new rules should bring next season. Which hitters and pitchers will be affected the most?
MLB Barometer: End-of-Season Risers and Fallers
53 days ago
53 days ago
For his end-of-year-wrap-up, Erik Halterman goes by round to list his risers to see how they performed vs. their earned auction value ranking, starting with Mookie Betts in Round 1.
FanDuel MLB: Friday Targets
60 days ago
60 days ago
With the Mariners on the brink of clinching their first postseason berth since 2001, Chris Bennett is recommending plenty of their bats against Oakland on Friday.
Yahoo DFS Baseball: Friday Picks
60 days ago
60 days ago
Mike Barner sets his sights on Friday's Yahoo slate, recommending a Yankees bat stack in their series opener against Baltimore.
Past Fantasy Outlooks
2022
2021
Detmers, the No. 10 overall pick in 2020, is at the stage of his development where he has nothing left to prove in the minors but is still waiting to have prolonged success in the majors. He registered a 3.19 ERA, 1.15 WHIP and 108 strikeouts in 62 innings at Double-A and Triple-A and has never pitched below Double-A in pro ball. On the flip side, he gave up 17 earned runs, five home runs and walked 11 in 20.2 innings through five MLB starts. The 6-foot-2 southpaw's famously plus curveball played as it should (.226 xBA, .320 xSLG, 33.3 Whiff%), and his slider was almost as good. He threw those breaking balls a combined 50% of the time. However, his 93-mph fastball, which he threw 45% of the time, got hammered by big leaguers to the tune of a .334 xBA and .743 xSLG. The margin for error is much smaller against big-league hitters, but if Detmers can have a better plan and better execution of when and where he throws his fastball, he clearly has the secondaries to be a high-strikeout big-league starter as early as this season.
Detmers' fastball sits at around 91-92 mph (touches 94), but that did not prevent him from absolutely dominating college hitters over his last two seasons at Louisville. The 6-foot-2, 210-pound southpaw had a 1.23 ERA, 1.00 WHIP and 48:6 K:BB in 22 innings as a junior and threw another 50 innings between the alternate site and instructs. His command, pitchability and competitiveness are elite, which is why he is able to get the most out of his stuff. He locates his fastball, which has above-average vertical drop, wherever he wants and complements it with a plus mid-70s curveball. Detmers throws his fastball and curveball in any count and gets whiffs inside and outside of the zone. His slider and changeup could each be average offerings. He seems to have the tools to produce like a No. 2 or No. 3 starter while having fringe-to-average fastball velocity. Detmers could debut this summer if a need arises.
More Fantasy News