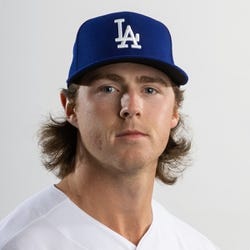 2022 Stats
W-L
3-0
ERA
3.47
WHIP
1.46
K
42
SV
0
2023 Projections
W-L
ERA
WHIP
K
SV
Unlock Our Projections
2023 Fantasy Outlook
Pepiot rebounded from a rough initial stint in Triple-A in 2021 to post a 2.56 ERA, 1.08 WHIP and 114:36 K:BB over 91.1 innings at that level last season. The improvement led Los Angeles to call upon the right-hander on nine occasions when in need of a spot starter or primary pitcher, and he held his own in the majors with a 3.47 ERA, 1.46 WHIP and 26.3% strikeout rate. Pepiot's 16.9% walk rate was less encouraging and highlights the primary obstacle in his path to becoming a front-of-rotation starter. There's a lot to love about his stuff, particularly his devastating changeup that is regarded as perhaps the best in the minors. His fastball also grades out well above-average, but his struggles with commanding it have at times impaired his ability to maximize the effectiveness of the changeup. Pepiot's command issues also led to too many home runs while up in the majors last season (six in 36.1 innings), and it's clear that learning to harness his arsenal will be key to his success moving forward. The Dodgers could certainly fill their need for a No. 5 starter with an offseason acquisition, but if they opt to look internally, Pepiot would likely be among the candidates to compete for the role. Read Past Outlooks
read more
RANKSFrom Preseason
#