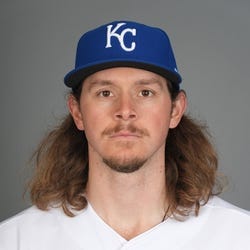 2022 Stats
W-L
7-4
ERA
2.18
WHIP
1.00
K
77
SV
24
2023 Projections
W-L
ERA
WHIP
K
SV
Unlock Our Projections
2023 Fantasy Outlook
Barlow was a workhorse for the Royals, finishing with 74.1 innings that tied a career high and was most among closers. The 30-year-old was effective in those innings, posting career best marks in multiple categories with a 2.18 ERA, 1.00 WHIP, seven wins and 24 saves. Barlow's 2022 success might be attributed to an adjustment in his secondary offerings. He threw his 4-seamer (24% pitch usage) less often in favor of his curve (31%), the latter of which stifled opposing hitters to a mere .138 BA and .202 SLG. His slider (45%) remained effective as his primary pitch, but he lost 1.7 mph of zip on his fastball, averaging only 93.6 mph. Only 6 of his 79 strikeouts came via the 4-seamer, as batters often teed off on the pitch (.554 SLG). Barlow's pitch mix tweak should be one he carries into 2023 as he enters year 2 of salary arbitration. Draft him with confidence based on recent track record and innings ceiling, but keep in mind saves might not be as bountiful as other closers. Read Past Outlooks
read more
RANKSFrom Preseason
#

* Exit Velocity, Barrels/BBE %, Balls Hit 95+ MPH %, and Spin Rate are benchmarked against 2019 data (min 30 IP). See here for more exit velocity/barrels stats plus an explanation of current limitations with that data set.
K/BB
3.50
K/9
9.3
BB/9
2.7
HR/9
1.1
Fastball
93.7 mph
ERA
2.18
WHIP
1.00
BABIP
.245
GB/FB
1.41
Left On Base
83.1%
Exit Velocity
79.8 mph
Barrels/BBE
3.4%
Spin Rate
2465 rpm
Balls Hit 95+ MPH
18.0%
Swinging Strike
14.3%
Advanced Pitching Stats
Loading Advanced Pitching Stats...
Defensive Stats
Loading MLB Defensive Stats...
Stats Vs Today's Lineup
Want more matchup stats?
View Scott Barlow vs. Batter Stats
Loading Matchup Stats...
Royals Depth Chart
Our full team depth charts are reserved for RotoWire subscribers.
Subscribe Now
Recent RotoWire Articles Featuring Scott Barlow
The Z Files: OK, I'm SOLD
Yesterday
Yesterday
Todd Zola reconsiders his stance against adding holds as a roto category, and takes a look at the impact it would have on relievers like Devin Williams.
2023 Fantasy Baseball Rankings - Way Too Early Top 300 Draft Ranks
44 days ago
44 days ago
James Anderson provides a way too early top 300 rankings for those who have the itch to start drafting for 2023.
Closer Encounters: 2022 Saves in Review, Part 2
46 days ago
46 days ago
Ryan Rufe recaps the saves landscape in this year's NFBC Main Event and shares his own hits and misses from this past season.
Closer Encounters: 2022 Saves in Review, Part 1
52 days ago
52 days ago
Ryan Rufe recaps this past season's saves landscape. Just how many teams preferred closer committees over the conventional approach?
Collette Calls: Scoring Tweaks
64 days ago
64 days ago
Jason Collette advocates for more experimentation with scoring setups in order to give fantasy relevance to a larger pool of pitchers.
Past Fantasy Outlooks
2022
2021
2020
Barlow took over as the primary closer in Kansas City on July 2 and racked up 14 saves across the final three months of the season. In that span, he maintained a 2.78 ERA and 1.15 WHIP while striking out 34 across 35.2 frames, though he was also charged with five blown saves. Barlow has quietly possessed some key skills of a closer throughout his career, as he's posted a K% of 29.7 or higher in three consecutive campaigns while also maintaining a HR/9 below 1.0 in two of his three full big-league seasons. Looking forward to 2022, there's likely to be some pullback on his 2.42 ERA, as indicated by an 83.1 percent left on-base rate as well as a 3.37 xERA and 3.33 SIERA. Even so, he should enter the campaign with the first chance to claim the closer role for the Royals -- assuming the team doesn't make any major additions to their bullpen -- and he has shown the skills to excel in the role across a full season.
Barlow led MLB with 32 appearances in 2020, all in relief. He compiled 30 innings, pitching better than his 4.20 ERA suggests. Barlow's xFIP was 3.30 with a 3.04 SIERA. His 31.2 K% was a career best while a 7.2 BB% was a significant improvement over 2019's 11.9% mark. Despite the solid peripherals, Barlow only logged two saves. He was second on the Royals with seven holds. The righty throws a 95-mph fastball but it's his curveball and slider doing most of the heavy lifting. The only crack in Barlow's armor is a career .330 BABIP, although 115.1 innings isn't nearly enough to establish a baseline. The Royals brought back Greg Holland, leaving Barlow as part of the bridge to the ninth. With an excellent strikeout rate supported by the underlying metrics and a high volume of innings, Barlow is a nice pick in leagues favoring dominant relievers to add punchouts and protect ratios.
Pitchers gain and lose velocity all the time, but it's pretty rare for a pitcher to gain three-and-a-half ticks from one season to the next without a role change, as Barlow did. He pitched 15 innings out of the bullpen for the Royals in 2018, averaging 90.6 mph on his four-seam fastball. Last season, Barlow pitched 70.1 relief innings and averaged 94.1 mph. Barlow saw a similar increase on his slider and threw the breaking ball more often. The result was a four-percentage-point jump in swinging-strike rate and a corresponding spike in K-rate to 29.7%. With more breaking balls, Barlow's Zone% fell dramatically and his walk rate spiked, but the tradeoff worked. He finished second on the team in holds with 14 and projects to open 2020 as the Royals' top right-handed setup man in front of closer Ian Kennedy.
More Fantasy News