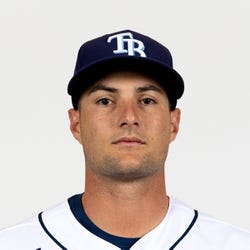 2022 Stats
W-L
12-8
ERA
2.54
WHIP
0.93
K
194
SV
0
2023 Projections
W-L
ERA
WHIP
K
SV
Unlock Our Projections
2023 Fantasy Outlook
McClanahan had one of those Jeckyll and Hyde type seasons which felt like a tribute to the 1990 season of Jack Armstrong. Like Armstrong, McClanahan had an amazing first half of the season with a 1.71 ERA, a 0.80 WHIP, and held opposing hitters to a .176 average with 9 wins before the break. He then had a small IL stint, came back with a promising outing, but then struggled in other outings around a second IL stint and won just 4 more games with a 4.20 second half ERA after the break. All in all, he eclipsed projected workload totals and the entire body of work was still very impressive even if it was frontloaded. The evolution of his change was the differentiator for him as it went from a show-me offering to righties to his second most utilized offering with an elite whiff rate giving him two pitches - one for each side of the plate - with elite whiff rates. Durability is the only remaining question mark here for Sugar Shane who looked like he was following the path 2018 Blake Snell blazed for him on the way to the Cy Young that season. That path is still well lit for the lefty. Read Past Outlooks
read more
RANKSFrom Preseason
#

* Exit Velocity, Barrels/BBE %, Balls Hit 95+ MPH %, and Spin Rate are benchmarked against 2019 data (min 120 IP). See here for more exit velocity/barrels stats plus an explanation of current limitations with that data set.
K/BB
5.11
K/9
10.5
BB/9
2.1
HR/9
1.0
Fastball
96.8 mph
ERA
2.54
WHIP
0.93
BABIP
.261
GB/FB
1.92
Left On Base
80.1%
Exit Velocity
81.8 mph
Barrels/BBE
3.5%
Spin Rate
2208 rpm
Balls Hit 95+ MPH
20.9%
Swinging Strike
15.8%
Prospect Rankings History
View Complete Shane McClanahan Prospect Ranking History
Advanced Pitching Stats
Loading Advanced Pitching Stats...
Defensive Stats
Loading MLB Defensive Stats...
Stats Vs Today's Lineup
Want more matchup stats?
View Shane McClanahan vs. Batter Stats
Loading Matchup Stats...
Rays Depth Chart
Our full team depth charts are reserved for RotoWire subscribers.
Subscribe Now
Recent RotoWire Articles Featuring Shane McClanahan
2023 Fantasy Baseball Rankings - Way Too Early Top 300 Draft Ranks
46 days ago
46 days ago
James Anderson provides a way too early top 300 rankings for those who have the itch to start drafting for 2023.
FanDuel MLB: Friday Wild Card Targets
59 days ago
59 days ago
The playoffs are here, and Chris Bennett has your FanDuel picks for Game 1 of the Wild Card round Friday.
Yahoo DFS Baseball: Friday Wild Card Round Picks
59 days ago
59 days ago
Mike Barner offers his top plays for Friday's Wild Card Round Yahoo DFS contests, including the surprisingly affordable Paul Goldschmidt.
MLB Barometer: End-of-Season Risers and Fallers
59 days ago
59 days ago
For his end-of-year-wrap-up, Erik Halterman goes by round to list his risers to see how they performed vs. their earned auction value ranking, starting with Mookie Betts in Round 1.
MLB Playoff Picks: MLB Wild Card Betting Preview
60 days ago
60 days ago
Erik Halterman previews each series from the Wild Card round of the MLB playoffs and offers up his best bets and player props.
Past Fantasy Outlooks
2022
2021
2020
The original plan for McClanahan was a familiar one for young Tampa Bay hurlers: get sent down late to work on something and show up once service time had been sufficiently manipulated. The young lefty pitched too well for the team to stick with the plan and some other injuries forced the matter, so McClanahan pitched at the big-league level all season under a watchful eye, only exceeding 90 pitches in four of his 25 outings. He won 10 of his 25 outings with a strong 20.1 K-BB% pitching around some traffic on the bases and a league average home run rate. He ran into some issues with his velocity as the season wore on, losing two mph off his fastball from June into August before gaining some of that back in September. His postseason work looked like a young pitcher who was working on fumes, and that will be a fresh memory for 2022 drafting season. Do not expect more than 150 innings from him in 2022.
McClanahan got knocked around in his first taste of Double-A during the 2019 season, posting an 8.35 ERA and 1.96 WHIP with a 21:6 K:BB over 18.1 frames, but he impressed at the alternate training site this past summer. The electric southpaw made his MLB debut in Game 1 of the ALDS against the Yankees. In his lone big-league appearance, he surrendered a hit and a walk before retiring the final batter in the ninth inning. McClanahan figures to begin 2021 at Triple-A, where he will work on honing his command and improving his fourth-pitch changeup. On the strength of his upper-90s fastball and two plus breaking balls, McClanahan will provide MLB value in some multi-inning role sooner than later. However, Tampa Bay could end up using him as a primary pitcher or multi-inning reliever rather than as a traditional starter.
The 31st overall pick in 2018, McClanahan climbed three levels of the minors in his first full season. In his final 20 outings across stops at Low-A, High-A and Double-A, he logged a 3.16 ERA, 1.18 WHIP and 126:31 K:BB in 102.2 IP, and that includes two blowup outings at Double-A over the final month of the minor-league season. A 6-foot-1 southpaw who had Tommy John surgery as an amateur, McClanahan has always had electric stuff, but he took a big step forward with his command/control last year. His fastball can touch triple digits and he throws three offspeed pitches, the best being a plus curveball. He has frontline upside if his command gains hold and his slider or changeup improves. However, in a free-thinking organization where Brendan McKay isn't even a lock to be used as a traditional starting pitcher, McClanahan's risk of being relegated to a multi-inning relief role is extreme.
More Fantasy News