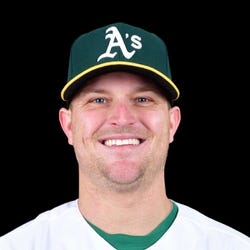 * Exit Velocity and Barrels/PA % are benchmarked against 2019 data (min 400 PA) and Hard Hit Rate is benchmarked against last season's data (min 400 PA). See here for more exit velocity/barrels stats plus an explanation of current limitations with that data set.
BB/K
0.25
BB Rate
6.8%
K Rate
27.3%
BABIP
.289
ISO
.074
AVG
.214
OBP
.273
SLG
.288
OPS
.561
wOBA
.255
Exit Velocity
89.1 mph
Hard Hit Rate
27.8%
Barrels/PA
2.0%
Expected BA
.212
Expected SLG
.291
Sprint Speed
24.0 ft/sec
Ground Ball %
63.9%
Line Drive %
17.8%
Fly Ball %
18.3%
Prospect Rankings History
Advanced Batting Stats
Loading Advanced Batting Stats...
Additional Stats
Games By Position
Defensive Stats
Loading Games Played by Position...
Loading MLB Defensive Stats...
Batted Ball Stats
Loading Batted Ball Stats...
Stats Vs Upcoming Pitchers
Want more matchup stats?
View Sheldon Neuse vs. Pitcher Stats
Loading Matchup Stats...
Recent RotoWire Articles Featuring Sheldon Neuse
AL FAAB Factor: Waiver Pickups of the Week
153 days ago
153 days ago
Erik Siegrist reviews the free-agent pool in the American League as top prospect Vinnie Pasquantino gets his first look at big-league pitching with the Royals.
AL FAAB Factor: Waiver Pickups of the Week
160 days ago
160 days ago
Erik Siegrist scopes out the waiver options in the AL as top Rays prospect Josh Lowe gets another shot at proving he's ready to handle big-league pitching.
AL FAAB Factor: Waiver Pickups of the Week
174 days ago
174 days ago
Erik Siegrist takes a look at the AL free-agent pool as Shane Baz makes his long-awaited season debut for Tampa Bay.
MLB: One Man's Trash... (Week 7)
191 days ago
191 days ago
Jeff Zimmerman tackles an important subject in fantasy baseball: drops. Steven Kwan, one of the hottest pickups in fantasy baseball early in the year, is now hitting the waiver wire in a lot of leagues.
Collette Calls: Steaks
193 days ago
193 days ago
Jason Collette stresses that RBIs -- or "ribeyes" -- are a skill of opportunity. Who is making the most of their chances so far this season?
Past Fantasy Outlooks
2022
2021
2020
2018
Neuse appeared in 33 games in Los Angeles, and although his .169/.182/.323 slash line left plenty to be desired, he did display some welcome defensive versatility by logging time at second base, third base, left field and right field. Neuse will have a chance to compete for playing time at the corner infield spots this spring in a rebuilding Oakland lineup. He still has potential given his 13 home runs and .830 OPS at Triple-A Oklahoma last season.
Neuse was one of the hundreds of players hurt by the loss of the minor-league season as he never got to show what he could do in a live game setting in 2020. He got reps at the alternate site as part of the A's 60-man pool, but he was not summoned to join the big-league team at any point. That had to be frustrating for Neuse as he is still left with the bad taste of his 2019 MLB debut, when he had a 63 wRC+ over 61 PA. He was one of the PCL's top sluggers before he got his cup of coffee in 2019, slashing .317/.389/.550 with 27 homers and 102 RBI in 560 PA for Triple-A Las Vegas. Those numbers are less impressive when considering age versus level and league context, and the A's decision to play Tony Kemp, Chad Pinder and Franklin Barreto over Neuse at second base before bringing in Tommy La Stella speaks volumes. Now 26, Neuse's future may be with another organization.
Stop us if you have read this before: hitter has a huge year at Triple-A in 2019, setting career bests in (insert categories). Neuse hit .317/.389/.550 for Sacramento with 27 homers, 99 runs and 102 RBI, thus surpassing nearly his entire offensive production from 2016-2018. Neuse was a slugger in college (and also a reliever who hit 96 mph), but it wasn't until last year that his raw power abilities matched his in-game power production. He played second base, third, shortstop and left field in Triple-A last year, but is only 2B-eligible on draft day. After Oakland traded Jurickson Profar in December, Neuse lines up to compete for the starting job at second, although his bat would have to carry him because the defense is lacking. He would also need to beat out Franklin Barreto and Jorge Mateo, who are superior defenders and are both out of minor-league options.
From a real-life standpoint, Jesus Luzardo may have been the top prospect the A's received from Washington in last summer's multi-reliever deal, but for our purposes, Neuse is the most intriguing. He is built like a tank and has raked at every level above rookie ball -- reaching Double-A last year after less than 100 combined games at Low-A and High-A. The sky-high batting averages on balls in play at High-A and Double-A (.490 and .532, respectively) make it difficult to read much into his gaudy numbers. However, he continued to make consistent, loud contact in the Arizona Fall League (.935 OPS), so it seems pretty clear at this point that Neuse can hit, and hit for power. At least 34 percent of his hits as a pro have gone to the opposite field, which bodes well for his ability to hit for a relatively high average. His strikeout rates have been high, but not unreasonable given his plus power and aggressive promotions. Defensively, he can handle third base but may profile at DH for the A's in late 2018 or early 2019.
More Fantasy News