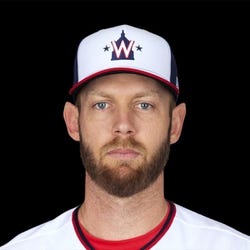 Out
Injury Ribs
Est. Return 2/25/2023
2022 Stats
W-L
0-1
ERA
13.50
WHIP
2.14
K
5
SV
0
2023 Projections
W-L
ERA
WHIP
K
SV
Unlock Our Projections
2023 Fantasy Outlook
In part due to the inability to work with the Nationals training staff during the lockout, Strasburg wasn't fully recovered from undergoing thoracic outlet surgery in July of 2021. He spent the first half rehabbing with bullpen sessions and three minor league starts before debuting on June 9. That turned out to be Strasburg's only appearance as he felt more discomfort after the outing. Strasburg is attempting to strengthen his neck and shoulder, but the recovery rate from thoracic outlet syndrome is a mixed bag. Strasburg is a wild card coming into this season. Even on the off chance he's healthy, he hasn't accumulated even 50 innings since compiling 209 innings in 2019. A late pick in a league with an IL is defensible, but nothing more. Read Past Outlooks
read more
RANKS
#575
ADP
#